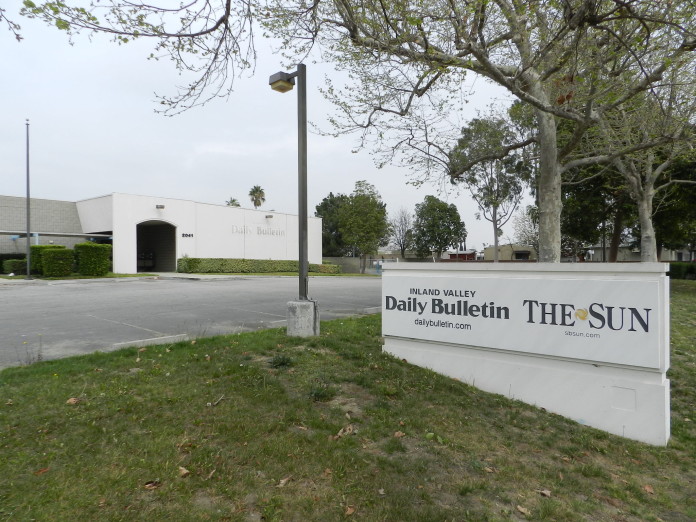 Last Wednesday, the nearly 200,000 readers of the Inland Valley Daily Bulletin awoke to find a color mug shot of a man staring smugly back at them from the paper’s front page.

Spread across his face was a wide, tight-lipped grin. Like a Cheshire cat who just swallowed a canary. In fact, he had.

The face peering up from morning coffee tables and breakfast counters across the Pomona Valley belonged to none other than William Dean Singleton, the Denver-based media mogul who has methodically bought regional daily newspapers across Los Angeles County during the past two years.

In a relatively short time, Singleton has cobbled together enough suburban dailies across the county to compete for major national advertisers with the Los Angeles Times, one of the nation’s largest metropolitan dailies.

Yet while Singleton seems to love buying newspapers — his MediaNews Group Inc. publishes 50 daily newspapers and 119 nondaily papers in 13 states — it is far from clear that he’s dedicated to putting out a first-rate one.

That’s what has reporters at the Daily Bulletin worried.

“As a journalist I have to ask why he is involved in newspapers,” said one newsroom staffer who asked not to be identified. “He has a love for money and that’s about it. He likes to say he was a reporter once. Yeah, well, if he was, he sure didn’t stick around long, did he?”

The newsroom employee, who previously worked at a Singleton newspaper — only to see the long arm of Singleton’s empire claim his career anew — added that the staff is nervously waiting for the ax to start falling.

Singleton is infamous for cutting costs, through strategies that are deviously creative. In some cases, he arranges for the former owner to slash jobs before he arrives. Alternatively, he inks an “assets sale,” in which he purchases the name, physical plant, subscription lists, etc., but not the employees — making most reporters re-interview for jobs at lower pay.

That’s exactly what happened last year at the Press-Telegram in Long Beach, just prior to Christmas. At a few money-losing newspapers, Singleton’s cost cutting has kept the doors open. Pretty much everywhere it keeps the money flowing into Media- News coffers.

“We expect the cuts to come on January 29, which is the last weekday before he takes over,” the Bulletin employee predicted.

Bulletin editor Mike Brossart acknowledged that there is “some anxiety” in the newsroom but insisted that major cuts are unlikely at the already lean newspaper.

To the contrary, where the Hearst name evokes memories (however shaded) of newspapers’ glory days, the name Singleton often inspires chills of disgust among journalists who see him as little more than a corporate raider, albeit one who has spent his entire career in newspapers.

Hardly dodging that characterization, Singleton pointedly fueled the ire of journalists by saying that if he had a choice between pleasing a thousand reporters or one banker, he’d rather please the banker. And Singleton is reputed to have gloated to reporters at one paper that news stories were only good for filling spaces in the paper that he couldn’t sell as advertising.

He wasn’t nearly so cavalier during interviews with the Weekly. In a conversation following his purchase of dailies in the San Gabriel Valley, Singleton attributed much of his reputation to a handful of journalistic purists who are living in the past.

Singleton added, “If you look past those disgruntled journalists, you’ll see growth at my papers, in both circulation and ad revenues.”

Singleton’s acquisition of the 68,000-circulation Daily Bulletin effectively puts him at the reins of nearly every major regional daily stretching from Chatsworth to Fontana, from Glendora to Long Beach: The Press-Telegram in Long Beach, the Daily News in the Valley, the Pasadena Star-News, the San Gabriel Valley Tribune, the Whittier Daily News and now the Daily Bulletin are all Singleton newspapers.

Only Copley’s Daily Breeze in Torrance, which is rumored to be near collapse, remains as a significant L.A. County daily not owned by either Singleton or Times Mirror, the parent corporation of the L.A. Times.

Unlike some past purchases, Singleton did not buy the Daily Bulletin outright, but rather absorbed the paper and 11 others from Donrey Media Group. In return, Donrey’s Little Rock–based parent company will get a cut of profits from Singleton’s Los Angeles Newspaper Group.

No matter how the corporate dance between Singleton and Donrey plays out, the competition professes to be salivating at the chance to hammer Singleton’s new paper.

“Hot damn!” exclaimed Tom Bray, managing editor at the San Bernardino County Sun, a Gannett-owned newspaper that competes with the Daily Bulletin. “If that’s the way he runs a newspaper,” said Bray, referring to Singleton’s reputation, “we can’t wait to get down to it.”

If Singleton repeats in Ontario what he did in Long Beach, it could spell trouble for reporters, readers and revenues, said Mel Opotowsky, ombudsman for The Press-Enterprise in Riverside. “It disregards the dignity of the people who work at the newspaper, and ultimately, that will be reflected in the pages of the paper.”

Yet Daily Bulletin editor Brossart asserted that some of the 12 cities in the newspaper’s circulation area may actually get an extra reporter on the beat as a result of the merger. In some markets, such as Denver, Singleton has invested resources in papers that otherwise would be trampled by competitors. That direction would be good news to readers in cities such as Pomona, many of whom feel abandoned since Donrey combined the Pomona Progress Bulletin with the Ontario Daily Report in 1990, the merger that created the Daily Bulletin. Some staffers estimate the paper lost well over 10,000 readers in the sprawling city as a result of the merger — and the Bulletin’s overnight decision to change the name of the Pomona Valley to the previously unheard-of “Inland Valley.”

“They tried to change history and it didn’t work,” one reporter says. “Can Singleton turn it around? Who knows?”

In recent years the newspaper, long a voice for lily-white Reagan Republicans, has struggled with not only its geography but its design, identity and integrity amid the Pomona Valley’s rapidly diversifying demographics.

“One would think the Daily Bulletin may now produce more income as a result of the larger, combined ad base,” says Opotowsky of The Press-Enterprise. “But will the newsroom see any of it? Or will it go into Singleton’s pocket? I don’t think anything is a foregone conclusion.”