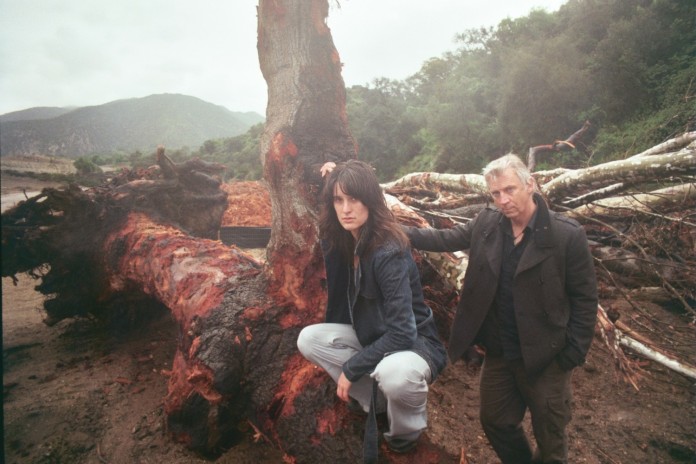 Story and Photo by Mark Cromer

Artist John Quigley and singer-songwriter Julia Jaye Posin shake their heads in a quiet sorrow as they gaze across what had been a lush forestland of centuries-old oaks and sycamores vibrant with wildlife now reduced to a muddied wasteland that’s stripped to the soil, a barren swath punctuated with steaming mounds of mulch.

It’s the first time the pair has returned to where the grove once stood following their arrest in mid-January trying to defend it. The scope of the destruction clearly pains them deeply.

“It looks like they’re bleeding,” Posin said as she considers the battered trunks of what had been oaks, a bloody hue emerging from the mangled bark.

As far as Quigley and Posin are concerned, the grim site should be named ‘The Michael D. Antonovich Open Space,’— a bitter tribute to the Los Angeles County supervisor whose name adorns signs in his 5th District that herald wild land preservation.

The grove that was dominated by hundreds of old-growth trees in the Arcadia Highlands, which provided a natural redoubt for deer, fox, occasional bears and many other animals, was annihilated in mid-January, with earth-movers destroying in 48-hours what nature had created over a century. The stretch of land is owned by the county’s Department of Public Works, which insisted it needed to clear the area so it can dump a half-million cubic yards of natural debris to be removed from the Santa Anita Reservoir.

Environmentalists and neighborhood residents mounted a frenzied campaign to save the forestland late last year and presented county officials with alternatives to clear-cutting the grove, but their proposals were rejected. Activists said the county’s real motive is to create a regional sediment dump.

In a last-ditch effort to save the majestic trees—or at least draw attention to their destruction—Posin and Quigley, who is known for his mass human installations, were joined by Travis Jochimsen and artist Andrea Bowers, the four slipping into the grove’s canopy during the wee hours of the morning before the machines and their crews arrived.

Their symbolic protest was met with derision from the crew that destroyed the grove, Posin said, as well as a few hair-raising close calls with falling trees. The sounds and sights of the old trees moaning, buckling and breaking under the assault of men was traumatic.

“It was as if the trees were trying to resist as they were pulled down and cut down,” Posin said. The four emerged from the trees that evening and were arrested by Los Angeles County Sheriff’s deputies, who had declared the entire area a “crime scene” in an outrageous but successful effort at preventing journalists and the public from witnessing the destruction of the grove.

While Quigley, Posin and other activists said there are a variety of black hats in this ecological tragedy, they consider the real villain to be Antonovich, whom they accuse of an epic tree-killing spree.

“Antonovich has certainly approved the most destruction of trees in Los Angeles County,” said Lynne Plambeck, president of Santa Clarita Organization for Planning & the Environment. “In the Santa Clarita area we have probably lost 5,000 or more oaks in the past decade.”

Calls and emails to the supervisor’s media spokesman were not returned.

Quigley, Posin, Jochimsen and Bowers—now dubbed “the Arcadia Four”—are facing prosecution on three misdemeanor counts (trespassing, unlawful assembly and resisting arrest), though a prosecutor familiar with the case denied that the District Attorney’s office was piling on charges.

Whatever their fate in court may be, the four of them will emerge again to fight the good fight against the most odious impacts of the most deadly invasive species on earth: humans.

But the tranquil grandeur of the Arcadia grove is now gone forever. That’s the real crime.