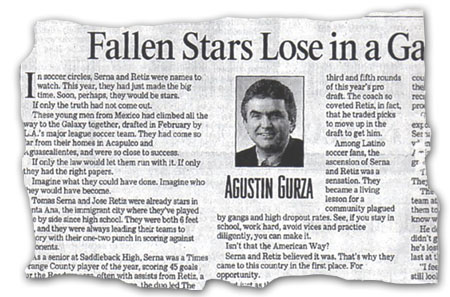 One morning each week, I have breakfast with a man who has taught me much-and who I have learned to respect less and less in the process. Like millions of other Angelenos, I have stared at him while sipping my cup of coffee, drinking in the smug grin that defines his cherubic face.

Of course, it is not his face that bothers me. It’s his words. More specifically, it’s what he doesn’t say that often sours my morning. I call this weekly ritual “Breakfast with Agustin,” and like many of Los Angeles Times columnist Agustin Gurza’s readers, I find his terminal affliction of Latinophilia (a symptom of which is using the term ‘Latino’ at least 45 times in each column, or three times in each sentence, which ever is more) to be everything from predictable to outrageous.

Unveiled as part of the Times manic ‘Latino Initiative,” Gurza’s column was met with the usual jeers and cheers any columnist can expect from readers, albeit much of the jeering falling on the Anglo side of L.A.’s constantly grinding ethnic fault lines.

Most columnists worth their salt should be wearing a figurative flak jacket at work and Gurza quickly earned his stripes. He wasted no time drawing heavy fire by pushing all the easy buttons; castigating Anglos for their anxiety over immigrant issues. While his goal may indeed be noble, his approach has been predictable and unfortunate: he advances a position and then implies that opposition to it is nothing less than-surprise, surprise-“racist!”

From Orange County school districts to the supporters of Prop. 187 to the bogeyman (or is it “storm troopers”?) of the dreaded ‘La Migra,’ Gurza has found plenty of blue-eyed targets in his sights. Of course, he is not alone. The LA Weekly’s cartoonist Lalo Alcaraz, while often right on-the-money with his artwork, often seems to live in a black and white world filled with familiar one-dimensional Anglos: evil white cops, evil white INS agents, evil white politicians, evil white businessmen, evil white ________ (fill in the blank).

Since the race card seems to have no credit limit with the media in L.A. (and the Times in particular, especially when it comes to La Raza!), it’s small wonder self-anointed “community activists” use it to motivate the masses. But when a featured columnist at one of the largest and most influential daily newspapers in the nation frequently resorts to employing it time and again, one wonders if he really believes in the ideas he embraces-since he so fervently defends them by smearing any detractors in advance.

Yet the most glaring, perhaps even the most damning, Gurza has displayed as a columnist the far has not been who he has attacked, but rather who he has turned a blind eye toward. One would hope that columnists at least try to adhere to Abbie Hoffman’s classic Yippie adage that “sacred cows make the choicest hamburger” and are willing to take on whoever needs a public thrashing.

But Gurza has made it clear that the targets of his columns are virtually as the old signs in the Jim Crow south used to read: “Whites Only.” Indeed, Gurza has been MIA on a host of incidents and issues in which blatant racist hate has been embraced and employed by Latinos.

When an Anglo principal was beaten down by Latino thugs in the Valley (lacing their blows with a “whites out!” harangue), Gurza was silent. When Latino parents marched their kids around L.A. schools holding signs that read “I Hate Miller” (a sentiment dedicated to Los Angeles Unified School District chief executive Howard Miller, whose only offense was to be an Anglo tapped by the school board to beleaguered district after its Latino chief was fired), Gurza looked the other way.

When Latino students at Cal State Northridge literally attacked the campus newspaper last fall for daring to run an editorial favoring tough entry requirements-something they deemed “insensitive” to Latino students-Gurza evidently could not find his voice or his pen.

To be sure, Gurza has occasionally used his column to highlight the common bonds that bind all cultures (such as when he writes about his family experience), yet even then he has gone off the deep-end on occasion. Perhaps the most outlandish moment came when Gurza reached hard to equate the roiling political debate over illegal immigration with the persecution and systematic genocide of Jews in Nazi Germany.

Not surprisingly, Gurza sought the cover of comments made by Anti-Defamation League attorney Sue Stengal, who noted her offense at the Anaheim Union School District’s plan to symbolically bill Mexico for the cost of educating the thousands of illegal immigrants in the district’s schools. Still, I have to wonder how Jewish readers felt when they read Gurza’s theft of their poignant, blood-soaked reminder “Never Again.”

Other examples of Latino racism abound in L.A., though it is unclear if Gurza can see them (perhaps he is blind) or just conveniently looks the other way. Yet I think it was hard to miss the “Pete Wilson Must Die!” signs that dotted the crowds of protesters that surged through L.A.’s streets at the height of the Prop. 187 hysteria, where the former governor’s effigy was burned.

Perhaps Gurza hasn’t heard that scores of veteran Anglo teachers across the Southland were demonized as racist xenophobes for supporting Prop. 187 or putting an end to the state’s disastrous bilingual education programs.

And maybe he has not been following the continuing war between Latino and black street gangs, which has all the ethnic trappings of a Balkan conflict. As a crime reporter in the mid-1990s, I spent the better part of a year on the street covering a Latino gang’s brutal campaign of terror to drive black families from a neighborhood it claimed as its own turf (one family was literally burned out of its home by firebombs). But it seems that such race-based hate on the part of Latinos is of little if any concern to Gurza.

No, Agustin is too busy keeping an eye out for any transgressions, both real or perceived, against what he likes to call “the poor and the powerless.” It’s quite a romantic notion that he fancies for himself, too bad it’s just a delusion.

And that is his greatest failure. Eager to fight the good fight, he ignores the fact that the revolution for social justice has a cancer on it. While I don’t believe that Gurza is a racist himself, I do believe he is a hypocrite. He is not a watchdog, he is a lapdog, one that has a long walk uphill to the moral high ground.

He has been given a unique opportunity and he has squandered it as surely as a politician who rides into office with the best of intentions, but then blows it by shamelessly pandering to his core interest group. Like a fearful politico, Gurza tells the masses (as well as his anything-but-powerless political allies) what they want to hear-not what they need to hear.

And that’s a shame.

This column was first published in the Los Angeles Press Club’s magazine The Eight Ball.