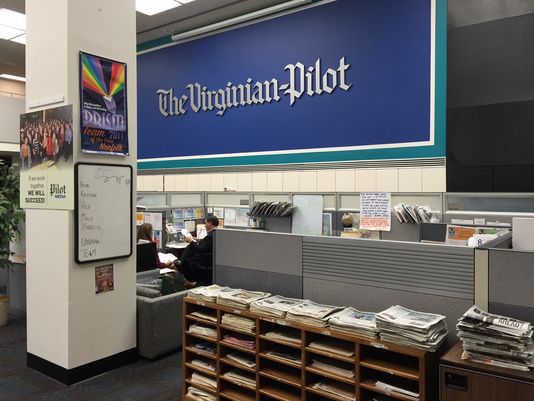 In the Old Dominion, shameful silence reigns at a newspaper after two white journalists are attacked by a black mob

But unlike the deep journalistic reporting and introspection that has flowed freely in the wake of the Trayvon Martin shooting in Florida and the anniversary of the riots that claimed 51 lives in 1992, the mob assault in Norfolk was met with silence by the reporters’ own newspaper, which sat on the story for two stunning weeks.

Well, it was only stunning until it became clear that the victims were white and the assailants were black. At that point, the newspaper’s silence reads like a familiar script to many white Americans.

Once the story finally broke on Tuesday—via columnist Michelle Washington at the newspaper—the Virginian-Pilot angry readers started to pepper the newspaper with questions less about the attack and more about the ensuing embargo on the story.

Editor Denis Finley released a statement attempting to explain his decision, a position he doubled down on Thursday with a column claiming the newspaper was apparently engaged in two weeks of “due-diligence,” that there was no indication the mob attack was racially motivated and that it really didn’t meet the threshold of a news story. http://hamptonroads.com/2012/05/column-pilot-stands-handling-attack-staff-members

Finley’s statement is, quite frankly, a shameful embarrassment to his newspaper and the journalistic profession. Finley’s assertion that had the mob gleefully attacked two non-reporters the V-P would not have covered it as a story can only mean one of two things: a) He’s an incompetent editor who doesn’t believe that mob violence which easily could have killed two people is a story; or b) He’s lying out of shame, cowardice and simpering fear over the untenable position he led his newspaper to in the weeks that have unfolded since two of his white reporters were beaten by a black mob.

My journalistic instincts tell me it’s the latter.

It remains to be seen whether in the days ahead we’ll be treated to the pitiful spectacle of a newspaper editor hiding under his desk, ducking hard questions and perhaps hoping readers now following the story will mistake silence for thoughtful deliberation, just as he seeks to explain his two week embargo on reporting the attack as “due diligence.”

But Finley’s standing by such transparent excuses goes far to reveal the deep intellectual dishonesty and the resulting felony journalistic malfeasance, that’s underpinning his actions.

In contrast, Washington’s column on the attack was indeed powerful, but she buried the lead—and she buried it deep, with forethought and intent. She only mentions the racial dynamic in passing and essentially at the end of her column. http://hamptonroads.com/2012/05/beating-church-and-brambleton

The hard, cold fact is two white people—that happened to be reporters—were set upon and brutally attacked my a mob of blacks that reveled in the assault so much that they took turns beating their victims, much like the black assailants of white truck driver Reginald Denny at Florence and Normandie that danced a jig of delight as they crushed his skull.

There is no reasonable doubt—none whatsoever—that had a white crowd set upon a black man and a black woman in precisely the same way, Washington’s lead may well have still dramatically read “Wave after wave of young men surged forward to take turns punching and kicking their victim.” But between “young” and “men” most assuredly would have been the word “white,” and the word she would have put in front of “victim” would have been “black.”

And her column wouldn’t have been published two weeks after the attack.

And the newspaper would have assigned a team of reporters to what would have been a series of spot reports and investigative news features.

And that’s damn good journalism. That’s what print reporters, photographers and columnists at newspapers of record are supposed to do.

But it should have been done for reporters Dave Forster and Marjon Rostami as well, or for any other whites attacked by a black mob.

Sadly, Forster and Rostami, like many other white victims of racially-motivated violence around the country, have been victimized a second time, whether they’ll recognize it or not, by an establishment news media culture that sees race in everything except whites being the victims.

Last summer, the Chicago Tribune completely omitted the fact in its news coverage of a mob of rampaging young men that attacked, beat and robbed residents of a neighborhood that the mob was black and their victims were white. When enough angry readers called the newspaper out on it, columnist Mary Schmich (who is white) pondered the issue on the Tribune’s Op-Ed pages, confessing her own “ambivalence” to the news desk’s decision to cut the information from the piece and recounting the head-scratching uncertainty that apparently gripped editors when considering whether the mob violence was racially motivated.

Schmich then sheepishly acknowledged in her column that “…yet race is an aspect of what happened.”

Whites were also singled out and attacked by black ‘flash mobs’ in Milwaukee and Philadelphia last summer, though the stories were never given much play in the national dailies and even some of the second-tier regional dailies watered down their coverage or ignored it all together.

One pressing example of this corrosive double-standard occurred in Long Beach, on Halloween in 2006, when three white women were horrifically brutalized by a black mob that included members of the street gang Insane Baby Crips. The assailants taunted their female victims with racial slurs during the attack. Yet the Los Angeles Times, in a sad testament to the extent to which the newspaper’s ideological orthodoxy has now infected its hard news coverage when it comes to the issue of race, promptly set about soft-shoeing that inconvenient racial dynamic—and quickly printed the victim’s names, while protecting the identities of their teenage attackers. Fortunately, the LA Weekly published an eviscerating deconstruction of the racial agenda that directed the Times news coverage of the attack, which was heinous enough for some members of the city’s black leadership to step forward and call it for what it was: a racially-motivated hate crime.

Perhaps that’s what Finley is waiting for, some black minister or community activist to call a press conference and give him and the newspaper cover—permission, really—to investigate and report this story accurately as a racially-motivated hate crime. Or maybe he’s just hoping it will blow over like bad weather, a not unjustified hope since it’s clear the local newspaper has dropped the ball and the Revs. Jesse & Al road show won’t be rolling into town on this one. Nor it seems will Attorney General Eric Holder be dispatching a team of Justice Department investigators to determine whether there were any civil rights violations or foot-dragging at the Norfolk Police Department.

So hell, maybe if Finley and the V-P keep it on the low-low for a little while longer the stench of this disgrace will dissipate, at least until the next white guy (better yet a white cop, militia member or disenchanted loner, etc.) attacks or kills a black victim and then the newspaper can get back to reporting these sorts of stories in a more comfortable manner.

At any rate, as newspapers continue to struggle to find a business model that works in a digital age, surely covering up and watering down vicious, violent assaults on white Americans by blacks or other ethnic/racial minorities is not a recipe for the renewal of our trade and craft.

To the contrary, it leaves increasing numbers of working and middle class whites angry, feeling ignored and estranged and ultimately furthers the very racial balkanization that newspapers should be trying to slow and unravel, not accelerate.

One part of that mission has to be to unflinchingly report in the news pages and to honestly confront in the editorial pages the racist hate crimes of blacks against whites, and having the courage to call it for what it is.

No one I know is holding their breath, of course, but they might give it a shot.

— Mark Cromer is a journalist in Southern California that has written for the Los Angeles Times, LA Weekly and many other newspapers and magazines. He writes frequently about immigration.