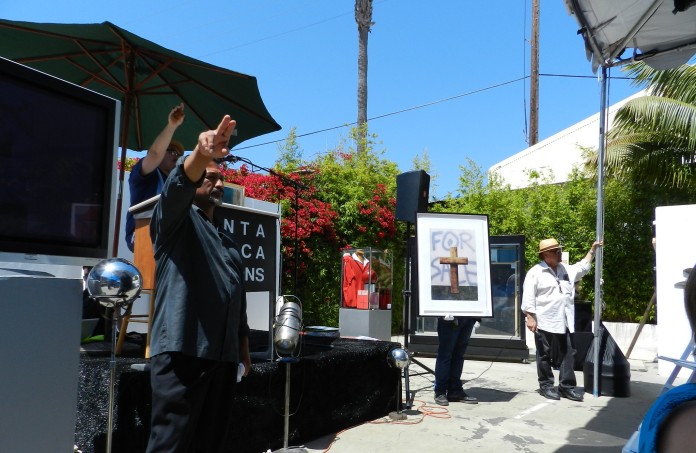 For the art center’s classic Track 16, the light at the end of the tunnel is a train

At first glance, the hundreds of art lovers that gathered at the Bergamot Station Arts Center on a Sunday in early June were savoring just another postcard perfect spring afternoon in Southern California amid fine art collections and hosted bars.

But for all the casual pageantry that the Los Angeles art scene can indulge, this one couldn’t conceal the fact that it was in essence a wake of sorts for the Track 16 building at Bergamot, which is being seized through eminent domain by the Exposition Construction Authority as part of a stop on the long-awaited light rail line that will connect Santa Monica with downtown.

Velma Marshall, a deputy executive officer in the Metropolitan Transportation Authority’s real estate management division, said the forced expropriation of the property was still being finalized in court, but that Track 16 was expected to be in possession of the Expo Authority by the end of the year.

As for the gallery owners that will be remaining at the reduced Bergamot Station, Marshall said she was sure they were relieved to be survivors. “I don’t interface with those tenants,” she said. “But I am sure they are happy to still be there.”

Requests for comment from Expo Authority officials had gone unanswered as Artillery went to press. Co-owner Tom Patchett, co-owner of the Bergamot property, did not return repeated requests to discuss the impending demolition. Wayne Blank, who also owns a portion of the center, could not be reached for comment.

The looming destruction of the Track 16 building is a bittersweet experience for gallery owner and art auctioneer Robert Berman, who has been in the building since Bergamot came to life as a fine art colony nearly two decades ago.

“When Bergamot was just coming into being, I saw this great space right in the middle of it that was full of promise. It was a real interesting time and Bergamot had great potential, there was a great vision of what it could be,” Berman said. “I like the idea of light rail coming to Santa Monica, connecting us to Culver City and Los Angels, it’s very appealing. But they are taking away my livelihood and a business I spent two decades grooming here.”

Berman’s two day ‘Expo Auction’ in June drew hundreds of people, from serious collectors (some who bid remotely via the internet) to the more casual buyer looking for a deal—or a steal—to compliment their living room, office or sun porch. But at times it seemed more fire sale than auction, with artworks being frequently sold for hundreds if not thousands of dollars less than the opening bids (and sometimes less than the reserve prices), which seemed to be about half of the estimated gallery prices of the works. An untitled, signed artist proof by Los Angeles artist Joe Goode valued at $4,000 sold for $1,500—$500 less than the opening bid—prompting the auctioneer to utter “Yikes!” after he brought the gavel down.

Still, Berman described the auction as successful and said it brought in more than a half million dollars.

Lois Lambert, who has operated her eponymous gallery at Bergamot since the station opened, said the art community’s high anxiety over the imminent seizure and demolition of Track 16 has been caused in large part by conflicting bureaucratic agendas.

“The city didn’t know what the Expo was up to and the Expo didn’t seem to know what the city was doing,” Lambert said. “They came up with five different plans that they showed us, the least offensive of which was one that called for simply modifying the buildings that will remain.”

Lambert wryly recalled that one plan called for the gallery owners to buy the properties they occupy. “We had to explain to them that most galleries don’t have the money to buy buildings,” she said.

Among some of the auction-goers at Track 16 in June, the angst over the locomotive coming down the track ran deeper, reaching into just who will be on those trains—and stepping off at the Bergamot platform.

“I don’t care how they try to sell it, everything is going to get a lot more crowded around here, from Bergamot all the way to the beach,” one middle-aged art patron observed to his friend as they stood at one of the hosted bars. “And what’s it going to draw here? People that are going to bring money, or people that are going bring problems?”

Lambert said the likely answer is hopefully more of the former but the galleries should be prepared, but not unnecessarily braced, for the latter.

“Coming from a pluralistic background and in support of exposing as many people as possible to the world of art, I am presuming that this ultimately is going to be a net positive for all of us,” she said. “However, someone will have to be there to police and protect us, and the city is going to have to effectively address the parking issue. But I think all of the hysteria is unfortunate.”

As for Berman, who will still have a gallery space at Bergamot after the Expo Authority forces him out of Track 16, the veteran art dealer seemed settled with a quiet resolve to the sound of the approaching train.

“I think [the agencies] understand it’s a fragile place, and a special place, and I don’t think they want to change the flavor of it,” he said. “They can do this and keep the integrity of it, as long as they keep the rents low enough so the dealers can stay. And it would help if we got a real restaurant and bar.”