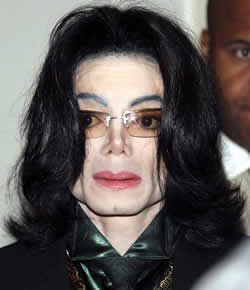 [The following column was written in June 2005 following Jackson’s acquittal on ten felony charges. In 2013, four years after his death, it was reported that investigators working with Jackson had paid at least 24 families more than $34 million to remain silent.]

Now that a jury of his fans has determined that Michael Joseph Jackson—the serial predatory pedophile who through molestation has emotionally murdered at least several young boys over the past two decades—is not accountable for his crimes; we must give pause for thought.

Indeed, we must deeply consider what sort of world it is that we now live in where a self-styled mutant like Jackson, a man whose respiration audibly quickened with excitement as he described sleeping with young boys on the documentary Living With Michael Jackson, can be declared ‘not responsible’ for his sick actions.

The nation sat transfixed as it watched an emaciated Jackson leer salaciously at one of his victims who appeared with him on the documentary, albeit a pixilated head, hissing “yessss” when asked if he enjoyed sleeping with pre-teen boys.

While the jury’s verdict demands our acceptance of the law and of the court’s authority (if not our respect for its often horrifically flawed results), it does not shield its practitioners from our collective musings as to what led them to acquit a credibly suspected, accused and charged child molester that built a Hansel and Gretel KiddieLand in front of his mansion and was seen more often with little boys than grown women (or men), for starters. In fact, such a blatant miscarriage of justice compels a still-breathing democracy to indulge some serious introspection of where it has arrived as a culture, as a people, when a pedophile dubbed ‘Wacko Jacko’ is widely celebrated as he moonwalks over the bodies of his small victims to acquittal?

Let’s be clear about one thing: there was no reasonable doubt whatsoever as to his guilt.

While an inept prosecution headed by District Attorney Tom Snyder fumbled the ball badly from the outset of the trial, particularly by pushing a wildly convoluted conspiracy theory—part of the charges that led to the victim’s shill of a mother to disastrously take the stand, the core allegations alleged in People v. Jackson were clearly sustained by the defendant’s own words, actions and behaviors.

This is the question: what sort of juror casts his or her vote to fully acquit a grown man who—it was acknowledged by his own defense team—begged one reluctant mother and then wept as he told her “If you love me, you will let me sleep in the same bed with your son.”

Most men have employed the “if you love me” line in order to leverage some action out of a hesitant or too-tired wife or girlfriend. Jackson admittedly uses it to get mentally-impaired or greed-driven mothers to offer up their sons like sacrificial goats on his altar of molestation.

Further, Jackson’s defense team did not contest the fact that Jackson spent virtually every night over the course of a year in bed with one of his victims. Every night. How is that not seen for exactly what it is? It is not ‘quirky’ or ‘eccentric’ or ‘odd.’ It is damning evidence that undeniably points to what Michael Jackson was doing with these children.

What sort of juror does not see this testimony for what it is: guilt beyond not just a reasonable doubt—but any doubt.

Is all common sense dead?

Perhaps the answer is evident in the high-gloss, high-rotation celebrity-driven entertainment that parodies as ‘news’ these days.

Or what of the twisted grin that Robert Blake flashed throughout the run-up to his trial on charges that he blew Bonnie Lee Bakely’s brains all over the dashboard? Perhaps he smelled something we didn’t at the time. The jury sopped it up, mulled it over and gave Baretta his walking papers. Even a jive-rapping street con like Huggy Bear must have dropped a deuce in his pants when he heard the verdict.

All the cameras were there as old Bobby strutted down the courthouse steps, pausing to reflect poetically about what the tide might bring tomorrow. It was vintage Blake, a salty character that I had seen flashes of two decades prior when I briefly marched along side him on the Great Peace March in 1986. He mused about getting some wind in his hair on the open road, of playing a game of Nine Ball with a one-armed Portuguese woman who kicks the hell out of him, rambling poetry that stoked the imagery of the Great American West.

Potent scenery from a killer who had just been cut loose to enjoy life—after coldly taking one.

Yet even more telling than the verdict of the Blake jurors, as an explanation of what sort of society acquits Michael Jackson, is the continued reign in Los Angeles of his Holiness the Cardinal Roger Michael Mahony.

Yes, there is a connection—a very clear and compelling one, in fact—between the inner-chambers of Mahony’s downtown Vatican of Our Lady of the Angels and the hidden rooms of Jackson’s pedophilic carnival dream at the Neverland Ranch in Santa Barbara. 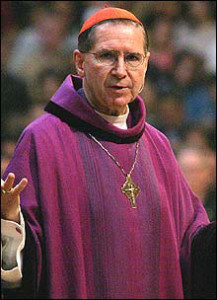 It’s called evil. A word rarely used these days, a term whose true meaning is more often denied or, when grudgingly accepted, only vaguely understood. But evil does exist. It is real. And it does not rely on our belief to prosper, but rather our disbelief allows it to grow violently in our midst.

And who could deny that Cadinal Mahony, who has fought doggedly over the years to ensure that the Los Angeles Diocese internal files on the child molestation scandals are never made public, is the spiritual soul brother of Wacko Jacko? Both men have taken orgasmic delight at the spiritual torture of children through horrific acts of molestation and both men have been spared any significant consequence by the public at large.

If Jackson is the Circus Freak dancing from one catastrophe to another for our amusement, Mahony then is the dour-faced prefect on hand to bless the debauchery and properly blacken the Eucharist for Communion.

He faces no tidal wave of revulsion from the pews, no credible threat that the laity will walk as the cancerous culture of complicity metastasizes.

They are a glimpse of things to come. Dark tidings from the future.

And the real guilty parties?

Well, that indictment rests on those who shall, it seems, inherit this decaying world. That vast marketing demographic which stretches from the Echo Boomers to Generation Zzzzz, a massive herd who keep their iPods cranked up around the clock and diligently join the text-message debate over whether Bo should have been declared the winner on American Idol.

A generation that’s averse to silence, afraid of free time and avoids critical, independent thinking. A generation that pursues triviality with all the zeal of a Nazi lockstep in a Nuremburg torchlight parade.

Lobotomized by a confluence of parental pampering and intellectual neglect, this segment of our culture has emerged legion and they are not willing to accept that self-esteem is neither a virtue or a talent, nor is it a shield from the hard, cold facts of life.

They stand united as a Generation of Whine, earnestly believing that there should be no consequences for their actions, no accountability for their behavior, no responsibility for their choices and absolutely no delay in their gratification. If a parent dares to tell them ‘No!’ they are entitled to shoot their parents in the face with a shotgun and, when caught, they will earnestly tell the psychologist that they didn’t know what they were doing was wrong. (That’s not a word they hear too often at home or in school either, as answers are no longer ‘wrong,’ there are just varying degrees of right.)

As such, they will get what they pay for: and they’ve bought every fucking moment of the environmental, geopolitical, economic and spiritual Armageddon that is barreling their way like an out-of-control Burlington Northern, whistlin’ Doomsday out of its charcoal-belching stack.

So Jackson is free to prey again (and again and again and again) while Mahony prays for more prey, something to keep his own cadre of molesters satiated until the investigations finally blow over and the proteges of Paul Shanley can again march with NAMBLA just like the good old days.

Latin America looms large for both men. For Jackson, Brazil beckons like some sort of sub-tropic Shangri la, as it teems with his preferred victim profile: impoverished Latino boys without fathers. For Mahony, continued mass migrations from the region into the American Southwest keeps his diocese brimming with illiterate, superstitious madres and padres who are raised to never question The Church (or the old white dude running it…).

Mark my words, Jackson is heading south of the border, where he can dress like Peter Pan and order boys from room service like so much calamari. Mahony will stay put for now and let the calamari be catered for him.

Well, how did Richard Nixon ironically sum up Charles Manson? “He’s as guilty as hell.” While that was pretty rich coming from Nixon, it was no less on the money.

And that’s just where they’re going to burn.