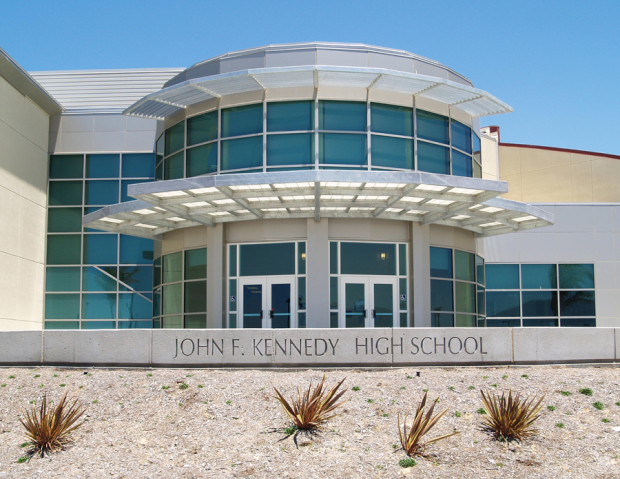 All things considered, it was a gorgeous day for a student walkout.

But the quintessential Southern California weather of crystal blue skies and pleasantly warm temperatures on a late January morning was at best a peripheral benefit for the 80 to 100 students that walked out of John F. Kennedy Middle College High School in Norco on Thursday and marched on the district offices.

Students said their protest was rooted in the twin concerns for campus safety and consistency in the classroom, following the disruptions caused by a popular teacher’s abrupt departure after she had allegedly been threatened by a special needs student, and a revolving line of substitutes her class in the months that have followed.

“We want our teacher back and we want proper safety procedures on campus,” said Megan Ortega, a 17-year-old senior at the school. “We’re in our senior year and preparing to hit college and we want to be prepared. We’ve had like seven substitute teachers in the past two months.”

Official details are sparse of the alleged threats made by the student against Language Arts teacher Heather Ellis, but her students said they were made in class and also apparently via email or texts. Ellis has not returned to her job since the threats, according to her students, but the student who allegedly made them has remained on campus and in class.

Ortega described the student as a junior with behavioral issues that she said students feel would be better accommodated in a different, more secure environment—not mainstreamed into JFK. “They accepted him in spite of these issues and that was the problem. He should be placed somewhere that is better equipped to help him and educate him,” she said. “It’s ironic that they label him ‘special needs,’ because they’re not handling him like he has them.”

The walkout followed a flurry of last-ditch efforts by school and district administrators to head it off, including calls to students’ homes the night before vowing truancy citations by law enforcement and suspension from school. Thursday morning, district officials called a forum on campus for students to vent their pent-up frustrations, but it was too little too late for at least half of the students that attended the meeting.

Students poured off the campus of the relatively new school—JFK is only five years old—and marched a short distance down the hill to the offices of the Corona-Norco Unified School District, chanting slogans and hoisting signs along the way.

As far as student walkouts go, this was a determined and spirited protest, but also a decidedly well-mannered civil demonstration in what’s locally known as Horsetown, USA, a small town that straddles Interstate 15 and advertises its charm as “city living in a rural atmosphere.” Once part of a massive dairy preserve that stretched from Chino across southern Ontario, Corona and Norco, much of the area has since been remade into a suburban developers paradise, with seas of cookie-cutter box homes and soulless shopping centers supplanting much of a proud agrarian past.

At the district offices, students met again with officials and then proceeded to march back to campus, pausing to savor support from motorists.

Students chanted their support for Ellis loudly, but hardly in any menacing tone, as they seemed too busy waving gleefully at the passing cars and trucks that honked their horns in support and proceeded along their route in such an orderly fashion that at some points it looked like they might be on a boisterous neighborhood field trip much earlier in their lives.

Yet theirs was clearly not a convenient excuse to ditch.

“We want [Ellis] back and we’re trying to get her back,” said Jesse Chavez, 17, a senior that also complained about the unsettled feeling that a parade of more than a half-dozen substitute teachers has lent to the class he had with her.

Walking alongside Chavez was Kimberly Kirchner, 17, a senior that said school officials had waited far too long to deal with the issue. “He’s still up there right now, hiding somewhere in his office,” she said of Principal Don Ward. “ABC News was looking for him today and our school officials don’t like the media. Our district hates the media.”

The LA Weekly was also looking for Principal Ward on Thursday, but was told by a desk clerk that he was no longer on campus, though students on campus said he was sitting in his office. When two students in front of the school attempted to talk with a reporter from the Weekly, a security guard sent the students packing and demanded to see the reporter’s driver’s license. “You were trying to talk to minors,” the guard said, refusing to give his name. “We don’t have students here that are 18-years-old.”

That might be news to Yesenia Vargas, 18, a senior, who said that students were legitimately concerned for their safety. “We feel very, very unsafe,” Vargas said. “A teacher has been threatened. What about us?”

But like Ortega, Vargas didn’t espouse any overt hostility toward the student that allegedly made the threats causing Ellis to flee. “I don’t think he understands what he has done,” she said. “He’s not in the right environment.”

Assistant Superintendent Thomas Pike seemed to take the day’s events in stride, offering a measured analysis of the mass student departure as well as the events leading up to the walkout. Student and faculty safety are indeed a top priority, he said.

Pike also accurately pointed out the multiple dueling interests of safety, transparency in campus operations, privacy rights and protecting the rights of the accused.

“We’ve been involved and actively engaged with the students on campus on this matter for months,” Pike said. “I don’t think we were caught off-guard at all by this, as we’ve been very aware and have undertaken a lot of staff actions on campus to address and meet the students concerns. Unfortunately, their frustration came to a head today. I understand it.”

In the shadow of Tucson and the recent violent incidents on campuses in Greater Los Angeles, Pike said the district maintained an “an aggressive program” to identify and intervene with students that may be suffering behavioral problems or struggling with mental issues.

Pike said the school had some trouble keeping a single substitute in Ellis’ class mostly by nature of substitute teaching itself; a transitory assignment in which often times a substitute teacher will either take another job somewhere else or take their own days off.

But he insisted that the district was taking decisive action now to remedy the problem.

“We have finalized plans today to resolve that concern of the students,” he said. “On Monday we will have someone in that classroom that can commit to the needs of the district.”

Organizer Avery Smith, 17, a senior, said a second automated call went out to students and parents Thursday after the protest, this one vowing action on student concerns.

As for meting out punishment for the walkout, either collectively or individually to the organizers, Pike seemed focused on the future, not recrimination.

“[Ward] is going to take a look at it, but we don’t want to escalate their frustration, so we’ll take a very careful close look at how to proceed,” Pike said. “We want to handle it in an adult, perhaps less punitive fashion.”

One thing the students and Pike both seemed to agree on Thursday was Ellis.

“We want her back just as badly as they do,” he said. “And we’re trying to make that happen.”