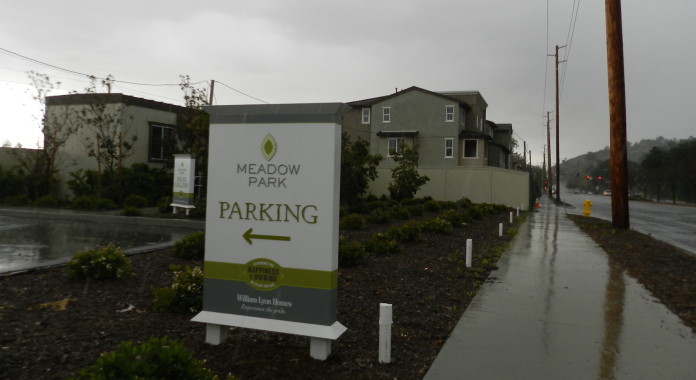 With California now set on perpetual simmer, residents are warned to conserve every drop of water even as developers herd more people into the deck party of our Titanic

Nearly a decade ago I was sitting in the living room of the renowned abstract artist Karl Benjamin, discussing the newly minted expansion of Claremont’s Village and whether attaching a modern retail annex marked something of an end to the college town’s quaint downtown.

Though well into his dotage, Benjamin offered a laser-focus assessment of the ‘new and improved’ downtown. “It’s totally out of whack with the character of our town,” Benjamin mused. “This ‘new’ downtown is a developer’s triumph.”

Benjamin offered that observation from the home he’d built on 8th Street off Berkeley Avenue in 1955, an abode that reflected the aesthetic of the Eisenhower era; a single story custom home properly landscaped with yard space and setbacks that provided a sense of openness and breathing room.

But Karl Benjamin is now dead and so are the sensibilities of his generation of what defined comfortable living.

As I watched a late winter rain whip across Baseline Road across from the latest development of beige boxes being jam-stacked into what had been a strawberry field but is now sprouting townhouses that builder William Lyon Homes has dubbed ‘Meadow Park,’ I realize that Benjamin’s estimation that it was a triumph of the developers was well put but only half right.

And thus while Southern California eagerly awaits El Nino to arrive like a dehydrated cowboy desperately reaching for a fresh canteen in the middle of this desert, residents across the vast suburban swath of 25 million people are treated to the bizarre and darkly comedic specter of governmental admonishments to conserve the most precious resource of water—even as the region adds hundreds of thousands of new residents annually.

But even after the balloon popped and The Great Recession momentarily slowed the gluttony of growth, the underlying disease simply retreated, like a virus taking refuge and biding its time and waiting for its moment to reemerge.

In Claremont, which has long-prided itself as an oasis of ‘trees and degrees’ and has been consistently ranked as one of the best places to live in the state and the nation, the pox of relentless density growth is again emergent even as residents across this town of 35,000 people have watched the hallmark of greenery that once it defined come under siege by water restrictions.

Trees and degrees might soon be replaced with ‘stumps and chumps.’ 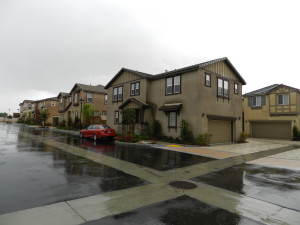 Restrictions on yard watering, shower durations and allowable daily flushes are bandied about even as new housing developments abound and expand under reassuring euphemisms like ‘Citrus Glen’ and ‘Meadow Park.’ Along Baseline Road, hundreds of new drab, soulless boxes now jut from the ground as a testament to the thousands of new residents Claremont is adding. In the Village, a new four-story development that is primarily residential will add hundreds more people and vehicles to an already congested retail core where parking now mimics a micro-Manhattan hot mess. Another proposed development behind the Old School House at Foothill and Indian Hill boulevards calls for building 94 townhouses, with another 150 proposed homes and apartments under review on the southern end of the city in its ill-fated Auto Center.

The concept that new housing and retail development should reflect the very characteristics that made Claremont’s quality of life so enjoyable has been cast aside. Why build single story, single family homes with 1,500-square-foot floor plans that are setback on lots with front and backyards when profits can be maxed out by jamming together double-decker boxes on treeless ‘private’ streets? Why maintain existing green space and forgo further growth altogether when residents can be ordered to cut back water usage even as developers are given the green light to pour ever more people into the consumption pool?

But perhaps it is all beside the point now.

There won’t be enough successive waves of El Nino to rain on this mindless parade of growth that could ever sustain it for long and the blinders dutifully worn by so-called Planning Departments in municipalities across the southland aren’t likely to fall away soon. No, it’s going to take the impending haymaker that Mother Nature is going to unload on the mug of cities across Southern California and the American west that will knock those rose colored glasses right off their developer owned and operated heads.

But it will be a bitter lesson that comes too late.

Karl Benjamin was right: we live in an era that heralds the triumph of the developers. But their rise was only made possible by a citizenry that was asleep at the wheel or too distracted by all the passing bright lights to see the cliff up ahead.