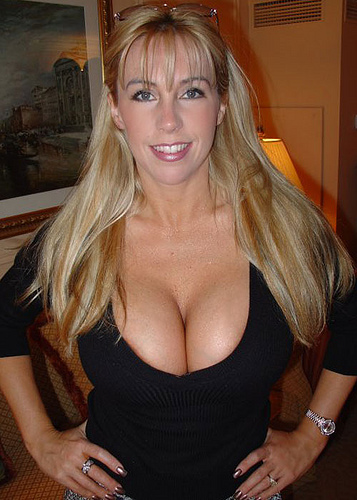 The housewife who became a legend is ready for her closeup

George and Gracie. Ricky and Lucy. Hubby and Wifey.

Just as Desi Arnaz and Lucille Ball became the most powerful couple in entertainment through their deft use of television, Hubby and Wifey are tapping the Internet to create what could become a new-media empire.

For the past year, Hubby and Wifey have become legend on newsgroups like alt.binaries.pictures.erotica, cultivating a legion of Wifey fans by posting waves of photos that depict the well-built blonde engaged in explicit sex. The photos are teasers for the videotapes the couple sells from home.

Two weeks ago, the couple launched Wifey’s World, a site featuring JPEGs, video clips, and order forms for tapes. There’s also the interactive Wifey cam. The site has a free preview area, but costs US$9.95 a month to join.

Since the site went up, business has exploded, with the homepage garnering as many as 400,000 hits daily, according to Hubby.

The couple — who agreed to a phone interview on the condition that their names not be used — seem bemused by the Cult of Wifey.

“We’ve been pretty shocked by the response,” says Hubby, a 33-year-old businessman who says he owns a mainstream distribution company. “We keep waiting for people to get tired of us and for this to die down, but it just keeps getting bigger and bigger.”

John Quinn, a 42-year-old businessman in Maryland, discovered Wifey on the rec.arts.movies.erotica newsgroup. He’s such an avid fan that he has emailed Wifey and Hubby scene-by-scene reviews of their performances.

“Here we have two people that [are] obviously in love with each other having fun, having sex and love doing the kind of sex that I like to see,” Quinn says. “The long and the short of it is I have bought every video that they have produced.”

“It was a total fluke,” she says. “My husband posted some Polaroids of me on the newsgroups last spring without telling me. We started getting all these responses and he was like, ‘Hey honey, check this out.’ I got a kick out of it. It was fun, a turn-on.”

By the fall of 1997, they were doing a brisk mail-order business for their home videos.

Wifey is a hausfrau who juggles her duties raising the couple’s three children and the bookkeeping side of their business. The couple doesn’t have a set production schedule. They shoot sporadically, once every three or four weeks. Hubby then spends an occasional evening sending batches of snapshots to newsgroups.

Sometimes their domestic lives creep into the tapes. In Wifey’s Oral Extravaganza, Hubby is holding the camera while he fondles Wifey. In the background, a child cries “Mommy” from another room, a look of surprise spreads across Wifey’s face, the couple cracks up, and the scene is cut. It resumes where the action left off (presumably after the kid is fed).

“I pretty much stay at home most of the time,” she says. Her excursions to the store, post office, and school to drop the kids off have yet to result in recognition.

That, of course, may change now that the Web site is taking off. “It looks as if the Web site will increase our business tenfold,” says Hubby. Before the Web page went up, the couple was shipping hundreds of tapes every month. If the present trend continues, Hubby says, the number could reach the thousands.

Wifey’s wholesome, apple-pie appeal is being dispatched to all corners of the globe, including Singapore, Iceland, Spain, and South Africa. “We get a lot of military guys overseas who want to see Wifey,” Hubby says.

Considering that the couple’s videos start at $39.95 (photo CDs start at $24.99), Hubby and Wifey may be joining the ranks of America’s millionaires before long, though they demur when asked about profits.

“We’ve heard some pretty hysterical figures getting kicked around out there,” says Hubby, who seems skeptical of media reports that attribute millions in profits to ventures such as theirs. Hubby estimates he and Wifey have made several hundred thousand dollars to date. Still, it’s nice work if you can get it.

Mark Kulkis, a former editor at Adult Video News who now works at Extreme Video, says the couple could increase their customer list even more through a commercial deal.

“The advantages would be wider distribution,” he says. “They’d be getting into retail outlets that they don’t have now.”

On the downside, Kulkis says commercial distribution would demand lower-priced tapes. “We move our titles at $13 a tape, and that’s even a little high. A retailer may sell it for double that price. So they’d have to come down, but they would more than make up for that with an increase in volume.”

Hubby and Wifey, however, say they have no intention of going pro.

A commercial deal may also exert pressure on the couple to expand their sexual activities beyond the handheld camera, one-on-one videos that they produce. They proclaim to be in love and monogamous, with no intention of swinging or performing with other partners for money.

“Hopefully when we’re older we can look back on this and laugh,” says Wifey. “It’ll be a nice memory of this crazy thing we did, and maybe we’ll have made enough money to put the kids through college.”

This article was first published in Wired.