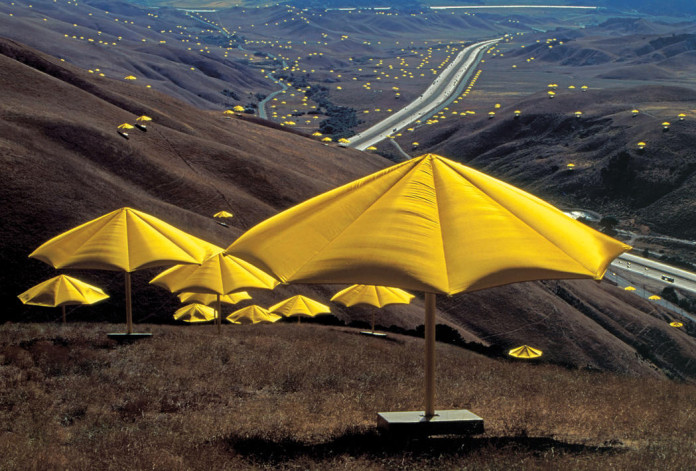 As far as iconic commercials go, the ‘blanket’ spot that AT&T has rolled out as part of its ‘Rethink Possible’ campaign is not destined for the immortal glory of say Coca Cola’s 1971 ‘Hilltop’ commercial, which bought the world a Coke (and apple trees, and honey bees, and snow white turtle doves…).

Instead of producing a generational touchstone, this installment of the corporate giant’s sleek effort at re-branding sparked an outcry that it had actually pulled off an art heist: ripping off Christo & Jeanne-Claude.

It’s not hard to see how AT&T triggered the loss-prevention alarms.

The spot opens to the wistful guitar and voice of singer-songwriter Nick Drake’s From the Morning (which AT&T’s suits were probably unaware the manically depressed artist recorded shortly before he committed suicide), as the camera follows a ladybug taking flight from what we discover is the Hollywood sign draped in an orange fabric that flows across the hills.

A richly textured montage of scenes unfolds depicting skyscrapers and cultural landmarks alike being draped in the warm fabric, from the St. Louis Arch to the Las Vegas Strip, all as Drake croons “A day once dawned, and it was beautiful.”

While imitation may be the sincerest form of flattery, Christo apparently didn’t see the compliment.

The artist, who with his late wife Jeanne-Claude has wrapped buildings, surrounded islands and adorned hillsides, had his lawyers let their fingers do the walking and a disclaimer now runs with the commercial noting the pair have nothing to do with AT&T.

For an artist that doesn’t need the money, that public slap-down was worth ten times whatever check the company would have written. Christo made his point and AT&T is making real quiet, declining to comment.

But it does the beg the question why AT&T, who developed the ad with a New York creative agency, wouldn’t opt for a respectful homage to Christo & Jeanne-Claude, a la Apple’s ‘Think Different’ campaign, rather than try to pass the artists’ signature style off as an endorsement?

“I think it is getting more and more difficult to determine where art ends and advertising begins, in part because corporations understand how useful a patina of the artistic can be for marketing,” said Richard Meyer, a professor of art history at the University of Southern California. “I think that the ad, which is quite beautiful in moments, embodies a sort of capitalist sublime where AT&T’s coverage, rather than Christo and Jeanne Claude’s artistic practice of covering, is supremely romanticized and rendered spectacularly visual. AT&T is ripping off Christo and Jeanne Claude but they are also betting that many people won’t recognize the reference, and [those] who do will see the company as that much more…bohemian as a result of their association with artists.”

AT&T claims they cover 97-percent of all Americans, and perhaps that’s true.

But the company’s executives in Dallas better learn that our country’s intellectual property laws cover everybody.