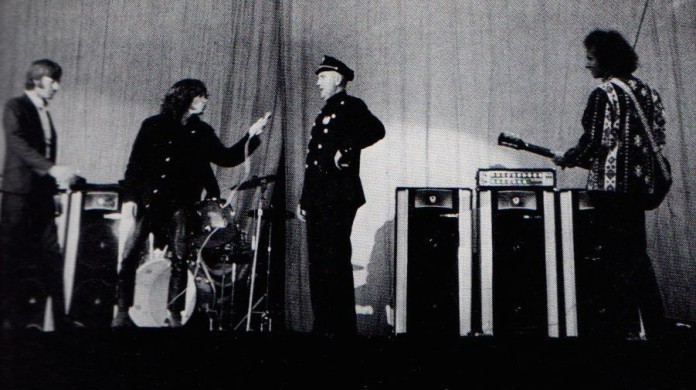 In this era of gadget-driven ‘IngSoc,’ the fine art of badinage and the high craft of freewheeling candid discourse surrenders at last to a grim tide of digital blurts, bleats, and emoticons among a ‘safe space, trigger warning’ Millennial culture that sits at the drinking table staring at their glow sticks in a techno-opiated stupor. Oh where have you gone, Charlie Rose?

“It’s a beautiful thing, the destruction of words. Of course the great wastage is in the verbs and adjectives, but there are hundreds of nouns that can be got rid of as well. It isn’t only the synonyms; there are also the antonyms. After all, what justification is there for a word, which is simply the opposite of some other word? A word contains its opposite in itself. Take ‘good,’ for instance. If you have a word like ‘good,’ what need is there for a word like ‘bad’? ‘Ungood’ will do just as well – better, because it’s an exact opposite, which the other is not. Or again, if you want a stronger version of ‘good,’ what sense is there in having a whole string of vague useless words like ‘excellent’ and ‘splendid’ and all the rest of them? ‘Plusgood’ covers the meaning or ‘doubleplusgood’ if you want something stronger still. Of course we use those forms already, but in the final version of Newspeak there’ll be nothing else. In the end the whole notion of goodness and badness will be covered by only six words – in reality, only one word. Don’t you see the beauty of that…”

Those of us of a certain age have been watching this junkie-like mass death of once fertile minds unfold for years, ever since we read Orwell in the late 1970s and early 1980s in high school and then drifted into universities in the mid-1980s prepared to set the world on fire with our words only to be the first generation to be met at the academy’s gate by a hardcore cadre of so-called ‘progressives’ that had infiltrated—perhaps infected is more like it—much of the faculty like a Maoist cancer cell hell-bent on instilling the joys of something called ‘speech codes.’

Those speech codes were among the first early attempts by the Left on the American campus at mass ideological programing and the installation of dogma by brazenly red-lining the vocabulary that could be spoken or written in the university, that old cauldron where the high-minded musings of professors pushing the intellectual boundaries of young minds had once melded with the degenerate thoughts of brilliant heretics like Mario Savio at Cal Berkeley in what became the flashpoint of the Free Speech Movement.

And from that natural birth moment came the term: “Say your thing, man.”

As I roamed the halls of the California State Polytechnic University, Pomona, and the State University of New York at Stony Brook thirty years ago, those were still sacred words among many students, a credo that celebrated the sanctity of words as the ultimate expression of the rich garden that is the mind, be it ripe with fruit or laden with landmines, or more likely both. Pluck one or explode the other or both.

A lot of us back then remembered the historical flashpoint when one of our own Founding Fathers, Jim Morrison of The Doors, stood onstage in New Haven, Connecticut, in December 1967, and broke into a riff about how’d he’d been sprayed with mace by a cop while making out with a chick backstage. The police at the concert didn’t take too kindly to Morrison relating the story to the audience of more than 4,000 Doors fans packed into the New Haven Arena and moved onstage to stop him. As a scowling sergeant confronted Morrison, Jim didn’t blink, he extended the mic to the officer and said: “Say your thing.”

Jim didn’t need a safe space or a trigger warning or a speech code. He wanted more speech, free speech, and he wanted ‘The Man’ to get his word in too. All aboard, baby.

Our own college days came a generation later but it remained an era when coffee houses were still hotbeds of discussion that rose over tables strewn with steaming cups of joe, burning cigarettes and newspapers, somewhat dimly lit joints crowded with college students, bohemians, hipsters, punks and hippies along with the odd square who were all reading, writing but most of all talking with each other.

Talking and listening, about anything and about everything.

There was plenty of media to fuel the collective discussion, from the establishment press to the underground rags of the ‘zine revolution to the street posters that advertised whatever was happening, but the glow back then didn’t come from a screen in front of faces fixed in a paralytic daze locked on small screens, rather it came from our faces often red hot as we talked about, as Marvin Gaye had so eloquently put it: what’s going on. Reagan, El Salvador, South Africa, the Cold War, Van Halen (David Lee Roth versus Sammy Hagar), porn (Ginger Lynn versus Amber Lynn) and television (Cheers versus Hill Street Blues), good bars and badly poured drinks, good dope and bad dealers, and so on and so forth and what have you and what not.

And we said our thing.

Ah, those were indeed the days but they are sadly long gone, scrubbed away during the long and laborious ideological cleansing of the campuses, a purification that has finally devoured what was once the laboratory of freewheeling speech and replaced it with a spawning ground of digital Pod People that appear ever more programmed even when trying to sound provoked. The faculty that has been regurgitating linguistic purée it into the yawning beaks of the fledglings in front of them now watch their birds of a feather flutter across campus to dutifully post warning signs as to what speech will be heard and more importantly what speech won’t be tolerated and to spy out anyone who isn’t enthusiastically chirping along with the rest of the flock.

The once warm womb that gave birth to free speech is now the cold, sterile mustering grounds for the perpetually aggrieved poseurs who, as Orwell correctly speculated, have set about further shrinking the language by aggressively pruning words and sterilizing phrases to ensure the wrong thoughts don’t bloom amid the hyrdoponics of a freewheeling conversation.

But if the death of true conversations—real conversations—is rooted in the university, its weeds have spread into a media that irrigates a drought-plagued culture with infotainment and even the Old World print publications seem at a loss for what to do amid their death throes in this digital age of diminished attention spans, though they’re apparently certain that counter-programing against the cyber tide’s template of 300-words or less is somehow not an option. That would make too much sense to be right.

And thus the Associated Press publishes a feature online called ‘The Big Story,’ which the other day was a three paragraph, 99-word brief about a Dallas business that painted a mural of Lee Harvey Oswald on its wall. That’s an interesting story, one ripe with potential that could take readers on a nice ride through the cultural landscape of an assassination that still echoes throughout our world today. But the AP gave it less than a hundred words slapped below a photo and ran it under its Orwellian banner ‘The Big Story.’

A couple months ago I noticed that Westways, the Auto Club’s evergreen print publication, published a one page journalistic bong rip under its featured column ‘A Conversation With…’ and the subject that month was Linda Ronstadt. It immediately caught my eye, as if any iconic figure from that era of Los Angeles’s golden moment in the rock world would saddle up once more at the bar of The Troubadour for a couple of good pours over a long talk, it would be Linda.

She of the Stone Poneys. She who birthed The Eagles before riding off on her own trail filled with silver threads and golden needles.

Now that’s a conversation waiting to be had and needing to be heard.

But what did Westways deliver to its millions of readers? Five bullshit questions that opened with the embarrassment of ‘How is the music scene different today?’ and closed with a pathetic whimper of ‘You’ve won so many awards, do any of them stand out?’ Apparently they couldn’t squeeze in any questions about her favorite color, her lucky number or if she’s likes to go to the beach. The entire ‘interview’ appears to be little more than 300 words. The funniest part of this middle school caliber ‘conversation’ with one of the most seminal figures of the ‘California sound’ that emerged during the late 1960s and early 1970s is the writer actually wanted to attach his byline to it: Barry Garron.

Barry Garron, who shall now and forever be the writer who could have asked Ronstadt any number of questions from a deep menu that her life presents; her struggle with heroin, her early days in LA and the epic scene’s evolution from folk music to psychedelic romps to country rock, her getting booed offstage for an inspired rant against President Bush during the Iraq War and how she contrasts that now with college students shrieking down speakers they can’t bear to hear on campus. He could have asked her about the musical collaborators in her life, from Glenn Frey and J. D. Souther to Emmy Lou Harris, but instead zeroed in for the sweet score of ‘If you had to do it over, would you do anything differently?’

If a conversation with Linda Ronstadt isn’t worth a 3,000-word minimum to roll out over a four or five page feature in the magazine’s sweet spot then it isn’t worth doing at all. But perhaps that’s counter-intuitive in an era when a photo with a caption is peddled as ‘The Big Story’ and students in the academy aren’t so much marginalized as they are mesmerized and are losing their critical thinking skills faster than they are their attention span.

I’m glad we said it and believed it when it counted.

Now that was a beautiful thing.