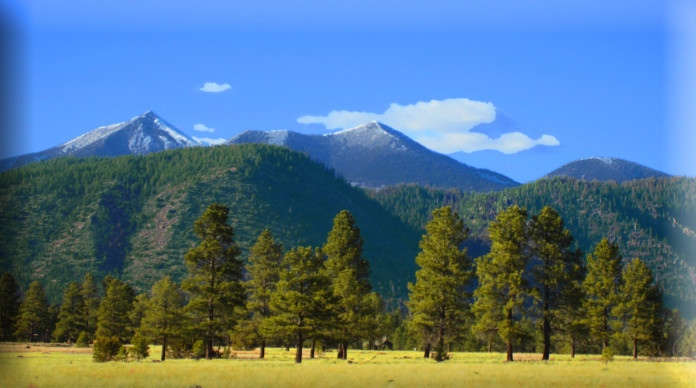 Driving along Route 66 Saturday afternoon, I saw those ‘ladies in black’ standing in front of City Hall, steadfast in their silent vigil against war, poverty and all things Bush. I had the sudden urge to roll down my window and shout “Don’t waste your time! Go home and make love while you still can! Then pour a martini!”  Of course, I didn’t disrupt their sad little display of discontent, I am sure they’re nice people, if a little bit confused. They seem to be under the impression that they are ‘making a difference,’ that what they are doing actually matters—even if by just exercising their right to dissent.

Flagstaff apparently has more than a few of these optimists running around, at least judging by the simplistic slogans constantly getting chalked onto the sidewalks downtown, thought-provoking scribbles like ‘We should be proud of peace, not war.’  Not that I disagree, but it’s a little late in the game for that now.  We are, globally, doomed.

I was again reminded of humankind’s terminal diagnosis this weekend as I dug into the essay ‘Planet of Slums’ in the June issue of Harpers by Mike Davis, a former journalistic colleague of mine from LA who got his hands on the report issued by the United Nation’s Human Settlements Programme late last year.   Reading Davis’s deconstruction was a bit like savoring the highlights from a lab report that reveals the cancer has spread everywhere.  Next year, for the first time in human history, more people will be living in urban population centers than in the countryside.

The vast majority of human migration into urban centers around the world has settled into slums; massive open sores of human misery so daunting in scale that one U.N. observer had difficulty even trying to calculate it, beyond noting “canyons of smoldering garbage” and rivers of human waste.  It was reported several years ago that outside of Manila an estimated 100,000 people were living in the municipal dump.   While humankind continues its frenzied breeding unabated, the planet has buckled under our weight in ways we aren’t even aware of yet—but we are about to find out. Arable land issues, available water resources, decimation of remaining rain forests and the literal strip-mining of the seas ensure that when the check comes due, we’re not going to be able to cover it.

But you won’t hear Bush, Kerry or virtually any other public official even comment on the consequences of over-population, mass human migratory patterns and the West’s beyond-gluttonous appetites for material goods.  No, if any of them even hint at the issue at all, it will be with hashish-inspired comments like “we have to grow the global economy to create jobs for people.”

I would pay good money to watch world leaders stand on a reeking mound of refuse in a slum of 3 million illiterate, starving and diseased humans and proclaim ‘We’re going to get you people jobs!’

Maybe that’s why I was so amused when this college kid stopped me in front of Maloney’s awhile back and tried to get me to sign a petition to ‘Stop the War in Iraq, Now!’ I just looked at him and said ‘You’re kidding, right?’   He probably thought I was a Republican.   I’m not, I just accept our fate and I don’t have time to entertain the absurdity of a petition stopping a war, a conflict that in the scheme of what’s happening globally is utterly insignificant.

While I still hold my own personal protests (I pray for total industrial collapse and some sort of plague that will cull the herd back to manageable levels), in the meantime I feel politically like a cancer patient. So I have decided to forgo the futile chemo and radiation therapies attempting to buy time and instead focus on enjoying the time I have left.   A few good drinks, the company of a woman, a walk in the woods.

Flagstaff is a pretty nice place to embrace the end, whenever it gets here.

This column was first published in Flagstaff LIVE!