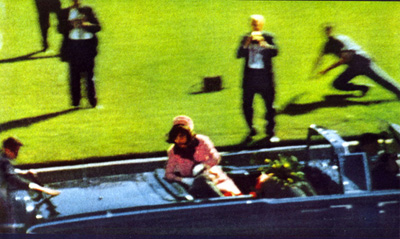 As the Kennedy assassination fades irretrievably from a solvable crime into a distant mythical happening in our collective memory, one where the only reachable verdict is Saint Jack was martyred too young, CNN apparently decided to celebrate the twilight of living suspects, witnesses and evidence with a salute to the very reporters who botched the story of the century.

The cable network’s presentation of ‘The President Has Been Shot’ on Sunday night featured the teary reflections and grim ruminations of those August journalists who were indeed “there as it happened.”   Not surprisingly, at every opportunity the cast of characters in this documentary did their level best to reinforce the final conclusion of the Warren Report: that Lee Harvey Oswald, acting alone and on his own accord, fired three shots at Kennedy, striking him twice and killing him.

In case viewers blinked, ‘The Most Trusted Name In News’ teased the opening segment with aged reporters repeating ‘I heard three shots,’ and then CNN anchor Aaron Brown appeared on the set and opened with the line “Three shots in Dallas…”  None of this was by chance or accident.  For ‘three shots’ is now key to vindicating these men as much as it is the Warren Report.

Accordingly, throughout the recollections of the assassination, we’re treated to various reporters describing “Bang! Bang! Bang!” and “I heard three shots” and “There were three shots” and perhaps the only thing that actually was surprising was that Dan Rather and Robert McNeil didn’t claim to look up and see Oswald in the window of the School Book Depository building waving at them as he fired The Rifle.   Yet how odd it was, even four decades after the whitewash that originally followed Kennedy’s murder, to watch some of the most fabled stewards of the Fourth Estate be reduced to a sagging gaggle of parrots cackling “three shots” on cue. I wouldn’t be surprised if Sen. Arlen Specter was standing behind the camera holding up a big card reading ‘3 Shots!’

Specter was the young lawyer on the Warren Commission who, along with commission member Rep. Gerald Ford, devised the so-called ‘magic bullet’ theory that explained how Kennedy and Gov. John Connally were hit at least six times by just two bullets, since they agreed that one of the three shots missed completely. Kennedy was hit in the back/neck and head and Connally suffered serious wounds in the back, chest, wrist and thigh. The single bullet that zig-zagged its way into official government history was found, according to the commission, in pristine condition on a stretcher at Parkland Hospital, presumably after falling out of Connally’s body.

The government’s entire case, its sole ability to hang its hat on a ‘Lone Nut’ named Oswald, comes down to three shots. A single shot more and the whole thing collapses like a Pravda story written by a KGB lieutenant working on a mean deadline and six doubles of Stolichanya.

Never mind that FBI sharpshooters couldn’t match Oswald’s alleged marksmanship of getting off three shots in less than six seconds from a bolt-action rifle that scored two hits, including a perfect final head shot, all at a moving target. Forget the entire debacle of the autopsy. Disregard the forensic examiners, police detectives and FBI agents who all burned their notes. Forget the missing evidence (like Kennedy’s brain, crucial to reconstructing the fatal head shot). And don’t bother reading railroad switchman Lee E. Bowers Jr. testimony to the Warren Commission, in which he describes extremely suspicious activity behind the grassy knoll at the time of the shooting. And don’t worry about Bowers being found dead not long after his testimony. Disregard the blizzard of bizarre happenings and indisputably shadowy players that stretched from New Orleans to Dallas to Washington D.C. before, during and after the assassination.

Even disregard the interesting moment, captured (probably inadvertently) on one of the live TV clips played on the CNN special, when mere minutes after the assassination a detailed description of the shooter (and the only shooter) is heard radioed to Dallas police units (prior to Officer Tippit being gunned down). So just minutes after Kennedy is shot and already there was only one shooter in official play—and the brain trust of Dallas PD gets fed a detailed description of what he looked like, despite no one actually claiming to see Oswald in action with the rifle. Amid all the chaos and confusion, within minutes a single shooter is eerily identified over the radio, they had their man.

But none of this matters, because all America needs to know is there were only THREE SHOTS!   And one man fired them, for his own reasons.

I don’t expect the subdued masses of mentally-diminished drones who watch Fear Factor, Survivor, The Apprentice and other fixes of media laudanum to know any of this, as they are self-made pathetic proles who exist only in the moment and they deserve the brutal fate the Fascists have devised for them.

But reporters like Rather, McNeil and Cronkite damn well know better and yet instead of waging a serious inquiry even at this late date they choose instead to cry on camera in some sort of maudlin expression of blubbering empathy with the nation they betrayed as they recall Kennedy’s murder.   If they shed any tears, it should be from the guilt and shame that must eat at them, haunted perhaps that they went along with the government line for so many years before finally being forced to acknowledge serious flaws in the official version of events.

If they must weep, it should be as they publicly ask for forgiveness for ridiculing as ‘conspiracy theorists’ any and all of those who have questioned the Warren Commission’s conclusion.   But the sun is now finally setting on the case, the last witnesses are using walkers and the key suspects have long ago slipped the cold embrace of justice. Even though upwards of eighty percent of Americans today do not believe the official explanation of the assassination, the government can breath easy because most of those people can’t bother to explain their skepticism.

That’s because they don’t know why they don’t believe it, never having bothered to test that instinctive, nagging doubt with even a cursory review of the publicly available evidence.   And that is what our government has long banked upon: a free nation that is simply too lazy to employ its rights, too fat and drugged to bother opening its eyes a little wider to see a greater truth. In which case ostensibly granting all those rights to the people, even enshrining them in a Constitution, is of no risk whatsoever as long they keep MTV’s Real World ramped up in high rotation and plenty of intoxicants available, legal or otherwise.

In other countries, such a vast sea of lingering doubt would foster a public rage that would demand action; the unsealing of all remaining records, an independent search for lost evidence and sworn public testimony from those players who are still breathing. From Argentina to Spain to South Africa we have seen such movements, such moments of historic reckoning.   But this is not likely to happen here.  No, in America we now remember John F. Kennedy as a one-dimensional sex god who did Marilyn Monroe and got blown away in Dallas, with even storied reporter Seymour Hirsch reduced to chronicling the President’s venereal disease. We now honor the fallen by merely replaying the same clip of John John stepping forward with a final salute to his father’s casket. We listen as the ever-older generation remembers where they were that day, without really pondering where the nation has come to since and why?

And we watch the reporters who were called upon to report the epic story of November 22, 1963, stammer and cry on a CNN special as they detail every mundane and worthless nuance of the assassination (down to the style of hats they were wearing in the press chase car) without giving so much as a moment of thought to elements that actually matter (such as the last minute change of the motorcade route which led to the detour through Dealy Plaza by Dallas Mayor Earle Cabel, brother of Gen. Charles Cabel, who was fired by Kennedy following the Bay of Pigs fiasco)—even if it is to refute suspicion with hard fact.   No, these men just cry and chant “three shots” over and over and over again as if they are still trying to convince themselves, if no one else.

Perhaps Jack Kennedy is resting in peace now, with those who were silently accomplice to the success of his murder now themselves tortured by their own failures as men and journalists.