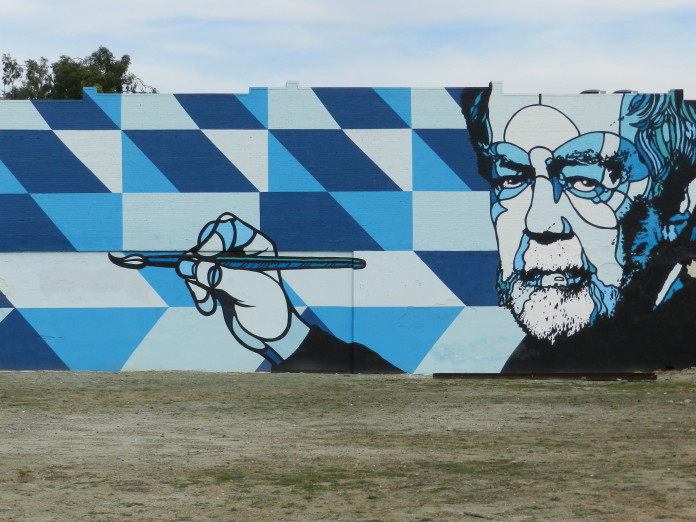 To hear some people tell it, the opening of the Claremont Museum of Art on April 15 inside the old College Heights Packing House will mark the realization of twin dreams: the creation of a new regional showcase for the arts and sparing the historic building from a date with the wrecking ball.

Civic boosters are heralding the museum’s 7,400-square feet of virgin exhibition space as something of a cultural anchor that’s infusing the massive, eight-square-block commercial development (think a microwave-sized serving of Pasadena’s ‘Old Towne’) with a vein of social responsibility.

After all, ‘progress’ can’t all be about money, can it?

That depends on whom you ask.

“We’ve got a clean slate here. There’s definitely expectation and anticipation that we are going to bring something different to life,” says William Moreno, the museum’s executive director. “I think the big challenge is what we’ll be in the future; we already have the essence of what we want to become.”

It’s that fluid state of becoming that prompted Moreno, whose resume includes stints directing the Aguirre Gallery in San Mateo and the Mexican Museum in San Francisco, to take the helm in Claremont.

“It’s very malleable,” Moreno says. “When do you get to start a brand new museum? How often does that happen?”

But if a new museum with a projected annual operating budget of a cool million—padded by a $3-million endowment—was an offer Moreno couldn’t refuse; how it plays out over the long run on the shady streets of this college town known for its “trees and Ph.D.’s” remains to be seen.

Walking through the still empty museum as work crews hum throughout the old packing house, one does feel the warm buzz of renewal radiating from the expanse of fresh white walls waiting to be adorned, from the small black spotlights dangling like spider legs, from the glint of lacquer protecting the dark hardwood floors and from the jumble of iron and wood rafters glowing in the muted sun let in through the skylights.

But leaving the museum, what was saved by art fades quickly into the jolting reality (for locals anyway) of what has been lost.

The museum is surrounded by Southern California’s new aesthetic of soulless retail businesses; the grand packing house along side the train tracks a potent symbol of a society that once built durable goods now dolled-up for its second act mirroring a people whose primary purpose is to consume products made on the cheap somewhere else.

The irony of this (de)evolution is not lost on Karl Benjamin, the internationally renowned abstract artist whose work will open the museum. Bearing a striking resemblance to Ernest Hemingway in Papa’s late winter years, Benjamin is delighted a 46-piece selection of his art will take the museum’s cherry. He’s a local boy made good on the big city scene whose ground-breaking work with color now gets a proper homecoming.

Interim Curator Steve Comba describes the opening exhibit from Benjamin as “a linear survey from 1953 to 1995, featuring key examples from his different phases.”

But for the artist who built his home and studio in Claremont in 1955, the so-called “synergy” of sandwiching a museum into a mash of high-end retail evokes a sense of loss.

“It’s totally out of whack with the character of our town,” Benjamin muses. “This ‘new’ downtown is a developer’s triumph.”

Whether the Claremont Museum of Art evolves into a venue that challenges the very ideal of mass consumerism as an end unto itself; or whether it remains little more than polite deck music on the Titanic for the wine and cheese crowd, remains to be seen.

Mark Cromer is a journalist who lives in Claremont. He can be reached at Mrcromer@aol.com