The sharp-witted writer’s meltdown on her Netflix show is a disappointing but perfectly fitting tribute to Hollywood’s self-righteous, vainglorious and hermetically sealed daisy chain

[Author’s Note: With Chelsea Handler now debuting her faux self-flagellation in the film Are You There Privilege, It’s Me, Chelsea, for this writer it was a depressing moment as the sharp woman who seemed rather comfortable confronting America’s culture psychosis with at least a casual and fearless honesty, I was reminded of this column I wrote on her post-election on-air meltdown. I hoped it wasn’t a sign of things to come for her. I was wrong.]

“We lived in this nice Jewish neighborhood. Everyone had Mercedeses and Jaguars, and I was going to school in a Pinto.”­

Let me just start by saying that as a kid from a not-that-nice of a neighborhood in Pomona, California, who spent some of my early high school years driving my mom’s hand-me-down, decade-old 1972 candy orange Pinto that sported a powder blue hood that we had found at Pik-a-Part, well, Chelsea, I can relate.

Pulling into the student parking lot at Pomona High School in 1982 wasn’t so bad, since a lot of my fellow Red Devils didn’t even have a car yet, but driving my hood fabulous ride up to Claremont High, Alta Loma High or Glendora High for an away tennis match and seeing my fellow young WASPs in their Bimmers and Jags was a bitch.

And so was flipping burgers at Carl’s Jr. on Indian Hill Boulevard back then, wearing a paper hat courtesy of Carl Karcher Enterprises as a Frank Burns-type manager named ‘Ed’ threatened to fire me from my $3.35-an-hour job if he had to wait for one more order of fries, and yet somehow I managed to endure the hardships and self-inflicted humiliations of growing up a white working class boy in P-Towne.

And I made my way.

By all accounts, Chelsea Handler did too, and then on the sheer power of her own intellect and resourcefulness she rose through Hollywood across the multi-platforms of writing, stand-up comedy and acting just to land at that Tranquility Base of her own show, which is where most of us discovered her. An electric bundle of brains and natural beauty, Handler was the female counterpart to Bill Maher, but perhaps with a tad more balls, or so at least it seemed at the time.

Like most of us, I suspect, I had stumbled upon her earlier but didn’t really start paying attention until Chelsea Lately on E! in 2007, when she really came out as a double shot, smart counterpoint to all the ass-kissing celebrity guest shows. A ‘saucy Jane’ slashing her way through virtually every Hollywood whore on their way to Tinseltown after parties.

What was not to admire?

Then in 2008 Simon & Schuster published Are You There, Vodka? It’s Me, Chelsea and along with millions of other American readers, and perhaps more than most of them, I was completely smitten. I’d long had a crush on Ann Coulter for essentially the same reasons: I found them both sharp as all hell, untethered to the ideological Home Offices of either major party, fearless free thinkers and both quite pretty.

Ahhhh, could that have been almost a decade ago? Well, evidently.

So the night after the election and Trump’s triumph, Handler went on her show and instead of a nuanced and reasoned take on Trump’s victory, akin to what Dave Chappell riffed during his cold open of Saturday Night Live just a few nights later, she instead turned into something that I, at least, hadn’t seen before: Chelsea the sniveling, self-serving, bawling victim.

Her opening got it started. She said she was sad, ok, disappointed, um, sure, and then she said she was confused. Confused? Confused. Uh, about what, Chelsea, that you were wrong?

“So the election is over and the result is not what was I was hoping for, so I think today’s show is going to be a little different for all of us, because like a lot of people in this country I am sad, I’m disappointed and I’m confused. But if Hillary can make it through a concession then I can make it through a stupid television show. And I’m taking her lead, she said we can do it so I’m going to do it for every woman out there.”

And her studio audience broke into applause, on cue. Because you know, she’s doing this “for every woman out there.” Alright, Joan of Arc.

But digest that for a moment. And then lets start with the actual facts.

Hillary Clinton did not give a concession speech, at least on election night when she had clearly lost, which is when concession speeches are traditionally given. To the contrary, after a lifetime speechifying about the inherent power of Feminism, the Madame Sister sent a man—a man—named John Podesta down to what was left of her sobbing minions to deliver the obvious bad news: SHE lost. But evidently it took a man to say so.

Word to Mills College: suck on that.

And in that moment alone there were millions of American women who channeled a little Madeline Albright in thinking “There’s a special place in hell for a woman who doesn’t have enough estrogen to face the music, congratulate the winner publicly and thank us tonight in front of the country for all that we did for her.” It was yet another particular act of entitled Hillary Clinton cowardice that had Shirley Chisholm rolling over in her grave. By hiding in her penthouse, Hillary said, in no uncertain terms, “I lost, so thanks for nothing, you unworthy proles!”

Reports now circulate that after Wisconsin turned red Hillary realized the jig was up and a little later managed the nightmare call to Trump before she suffered a psychotic break and began shrieking about the FBI’s Jim Comey torpedoing her campaign and then projectile vomiting high voltage indictments against everyone but herself, then accordingly collapsed in a smoldering heap and poor Bobby Mook decided Podesta would have to atone for his Wikileaks infamy and carry news of the Appomattox surrender to the troops.

Then there’s Handler’s declaration that she was “taking her lead” and was intent on “doing it for every woman out there.”

Well how gracious of you Chelsea, um, but what about the 30 million women that voted for Trump? Oh, snap!

As the tears began to well in her eyes, Handler introduced, with a fleeting moment of class I should add, her guest for the evening, California Sen. Barbara Boxer, an old Liberal that I’m still proud to say I voted for twice, in her first two times on the senatorial ballot, before I eventually had to pull the plug. But I still like her. She’s no Golden State legend like Dianne Feinstein, mind you, but like Dianne, Boxer has class, smarts and moxie. I’ve come to disagree with her as all hell on most issues, but I appreciate her resilience and I respect her commitment to try to better our fellow Americans lives, even as I think she’s running the wrong way down the field. I know it might sound confusing, but such is life. And so unsurprisingly, to me, Boxer comported herself on Handler’s show with a calm display of cogent class and the wisdom of her life experience, truly a woman of her years.

Of course, as I can still feel that way about a Liberal Democrat, now I have to wonder if Chelsea has ever felt that way and/or said recently and explicitly that about a Conservative Republican?

As I watched Chelsea start to cry on her show, perhaps I should wonder not, as she unspooled in a most un-Chelsea Lately way. Or just in a way that a smart, tough chick should know is very unbecoming for the woman we, or at least me, thought she was.

Yet there she was, looking like she just got spanked.

And Sen. Boxer, to her credit, remained rather stoic during Handler’s pathetic bawling, clearly if silently looking at the unexpected amateur sitting across from her, as Chelsea continued “And everyone in my office is like you have a responsibility and you have a voice and you need to use it, and you have to be here.”

Wow. Alright then. That settles that, cancel your one-way American Airlines ticket out of town.

Boxer started clapping with the crowd but the distant look on her face projected what everyone outside of that audience was thinking: “So you threatened to leave the country if America elected Trump. You vowed to go, Chelsea, when the rolling polls called Hillary as much as 12 points up, but then Trump won and suddenly that multi-million dollar kickball you swore you’d march off the playground with if the game didn’t break your way, well suddenly America seemed like a nicer place to stay and try again.”

Granted, I am projecting, yet it is now, unfortunately, informed speculation.

And how convenient it was that Chelsea’s staff convinced her to stay here in the homeland, yet one more of the Hollywood jihadi, raising her victim banner and eager to dedicate her show to the fatwa against Trump and the America that elected him, to urge college students across the nation to don ideological martyrdom vests and explode themselves in shrieking seizures all over campuses that mask $50,000-a-year wombs.

Well, I’m just saying, it’s a drag. She seemed like such a cool chick.

I guess I expected to tune in to find Chelsea with that bottle of Blue Label Stolichnaya, pouring doubles for her and Sen. Boxer, lighting a smoke and leaning back into her chair to announce something like “Well I don’t know about you, Hillary voters, but I feel like I just got fucked. Royally. In which case, let’s put on some Marvin Gaye, I’m thinking ‘What’s Goin’ On?’, let’s drink for a week and then drunk dial Trump’s America and tell them ‘We love you baby, what happened? Please come home!’ and then let’s start looking at 2018.”

Are you there, Chelsea? It’s me, vodka.

Get back in the Pinto and get the hell out of Hollywood for awhile. 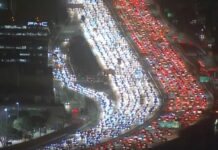 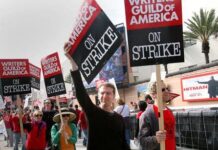