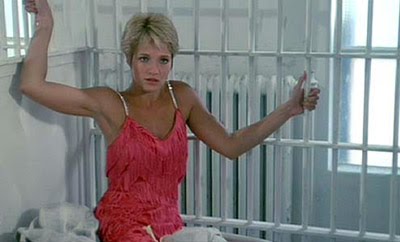 A look inside the behind bars scene

Online dating services are almost as old as computer networking itself.

So when Ken Kleine decided to launch a Web-based business that would, as he puts it, “tap into an universal issue, loneliness,” he knew he was going to have to find a unique niche. Something that would be more exotic than a clearinghouse for Russian pen pals or Thai mail-order brides. Something less predictable than swingers sites.

That’s when the 61-year-old retiree was struck with a vision from above (or perhaps below). Why not create an introduction service that features women who are in prison?

“I figured the loneliest people out there have got to be the people who are locked up,” Kleine says. “They are pretty much the closest thing you can get to a real captive audience.”

Kleine, a career workers’ compensation representative for Ford Motor Co., was further encouraged after he met a female parolee from Florida, who agreed to help him find convicts willing to sign up for the service.

“She told me, ‘You’ve got a gold mine!'” he recalls. “She started contacting her friends in the joint and getting girls to pass around the applications.”

By March of this year, Jailbabes was born.

Jailbabes is a fairly straightforward venture. The Web site features photos and short bios of incarcerated women across the United States, who apply to appear on the site. The service is free of charge for the convicts, who send in photographs, sketches (not unlike wanted ads in the post office), and vital statistics such as measurements, age, sexual interests, and release dates.

Kleine says he has run into a few glitches along the way. “I had one irate husband call me and start screaming about how that was his wife on my Web site,” he says. “He told me there was going to be hell to pay. Needless to say, I removed her quickly.”

While the site does not list the crimes the inmates committed, some of the release dates give you an idea. Some women on the site are scheduled to be set free in a few months. Others show release dates of 2010 or longer. There are even a few lifers on the site, with release dates that simply read “n/a.”

About 1,000 women in 14 different states are listed on the site. Texas, Florida, and California provide the bulk of the entries. Nearly 40 new inmates pop up on Jailbabes every week. Kleine says he is adding new states each month and expects to go international by early next year.

Kissing Between the Bars

Operating the business from his home in Palm Springs, California, Kleine says the past five months have brought both growing profit and pleasure.

He calculates his overhead at about US$150 a month, not counting the 25 hours a week he puts into running the site. While suitors can browse the site for free, Kleine makes money by selling prospective pen pals the addresses of prisoners at $7 per address.

As he sifts through the mail stacked on his desk, Kleine lifts up a check from an Australian man who is ordering the addresses to 15 prisoners. Another check from a Texas man will cover the cost of 10 addresses.

On the pleasure side, Kleine, who calls himself “The Warden,” has taken full advantage of getting first dibs on all the inmate applications that cross his desk. He is currently dating an inmate at the women’s prison in Chino, California, a courtship that involves body searches and lots of paperwork for sporadic weekend visits.

“She’s worth it,” Kleine attests, pointing to the Polaroid photo on his bulletin board that captures their first kiss behind bars.

And Kleine’s not alone. He says a few couples that met through his site are now engaged.

Wally, a 40-year-old postal worker in Oregon, understands the affection for inmates. In the past few months, Wally (who asked that his full name not be used) has ordered 20 addresses from Jailbabes.

“I got responses from 18 of them, which of course I had to narrow down to five or six girls I was really serious about,” he says. “It’s totally changed my view of prison and prisoners. I have more respect for inmates now. None of these women have tried to tell me they were innocent or there by mistake. They own up to their crimes.”

Wally has a hard time putting his finger on just why he is interested in corresponding with convicted criminals — in his case women doing time for drug possession, prostitution, shoplifting, and involuntary manslaughter.

“I guess I like the way they lay their cards on the table,” he says. “They are really open about themselves and who they are.”

One middle-aged Florida inmate who appears on Jailbabes, advertising herself as an unassuming horse trainer, also appears on the Florida Department of Corrections’ site, which lists detailed information about convicts in the system. The woman has 12 different aliases and was convicted of 13 different counts of burglary, grand theft, and assorted other crimes.

While Kleine says he has encountered no resistance from any corrections officials, a California prison spokeswoman advised people writing inmates to use caution, since sex — no matter how remote the prospect — can addle common sense.

“We always have concerns about prisoners’ ability to manipulate private citizens,” says Christine May, of the California Department of Corrections. “If you are going to write an inmate, you should not include any personal information like your home address, phone number, social security number, or any other information like that.”

Yet guys like Wally seem undeterred by such admonishments.

“Maybe I’m stupid, but I really believe I can trust these girls, at least based on what I know about them.” Wally pauses at the thought, then notes, “Of course, half of the people who know what I am doing think I’ve lost my mind.”

Not quite, says Melanee Fishwick, a psychologist who specializes in human sexuality. But actively seeking women who are beyond reach is certainly a somewhat unhealthy attraction. “If your mom was unavailable emotionally, you would tend to gravitate to those types of women who are unavailable, which is what these men are doing.”

As for Kleine, he’s not ready to plead insanity. Instead, he’s gearing up for another Web-based venture.

“See this girl?” he says, brandishing a photo of a gorgeous blonde. “She’s my top-seller. I’ve sold her at least 20 times already. I’m just getting started here. I’m researching a companion Web site to Jailbabes that will feature male inmates. Can you imagine?”

This article was first published in Wired.