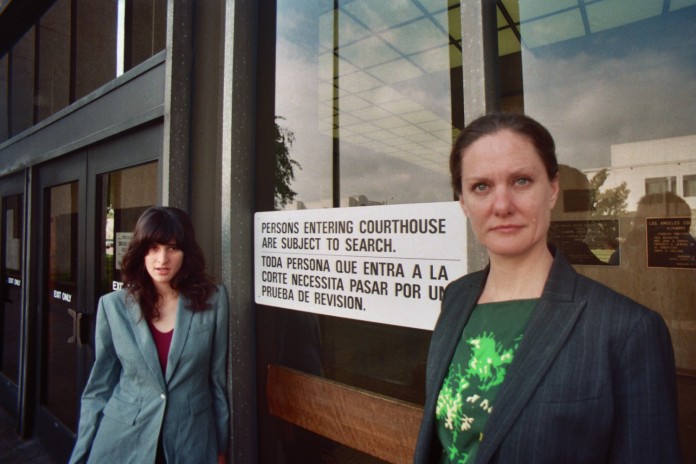 Andrea Bowers would have loved to celebrate this year’s Earth Day somewhere other than in the sterile and somewhat stuffy confines of a Los Angeles County courtroom, but her own principles—and the prerogative of prosecutors—made it a date in front of a judge.

Bowers, photographer John Quigley, songwriter Julia Jaye Posin and activist Travis Jochimsen, collectively known now as the ‘the Arcadia Four,’ are facing trial on a variety of misdemeanor criminal charges stemming from their tree-sitting effort to save hundreds of century-old oaks and sycamores in the Arcadia highlands.

As she cooled her heels and waited for a pre-trial hearing to start, Bowers reflected on her crash course in the consequences and stakes of direct action eco-activism. Known for her artistic themes that explore the long struggle of women, Bowers says she has been both unsettled and inspired by the experience.

“It really has been scary in many respects,” Bowers says. “Having never been through this before, there is that aspect of dealing with the unknown. But at the same time, it has served as a catalyst that has helped fuel the momentum of groups like the Urbanwild Network, and that has been amazing for me.”

All four were arrested after spending 16-hours in the canopy of the old growth woodland, braving county work crews that were slamming bulldozers into the trees surrounding them as the grove was destroyed tree-by-tree.

As harrowing as their protest was at times, with massive trees crashing down literally around them, and despite a long night in a jail cell, District Attorney Steve Cooley’s office seems intent on exacting more punishment from the four. Initial discussions between the DA and defense attorney Colleen Flynn had prosecutors asking for jail time and tens of thousands of dollars in “reimbursement” for costs allegedly tied to the more than 50 deputies that arrived at the scene of the four-person protest.

While the county’s position has softened somewhat since, Flynn has argued the four have paid a price enough already for their peaceful protest. Quigley has been adamant that he is ready to face a jury and Bowers seems as equally resolved to see the matter through, come what may.

“Only a small part of my job was to sit in that tree,” Bowers says. “A much larger part is to promote our intentions behind the protest, which is to protect the trees.” She is already at work on turning the video she shot of her experience in the trees and her judicial crash course since into something more.

“Andrea Bowers: Political Prisoner!” she jokes with a sweet smile outside the courtroom.

Wherever the prosecution takes this case, you can bet it will Bowers and Quigley’s work outside the courtroom on the subject that will indeed become a powerful Exhibit A.

This article was first published in Artillery and the LA Weekly.