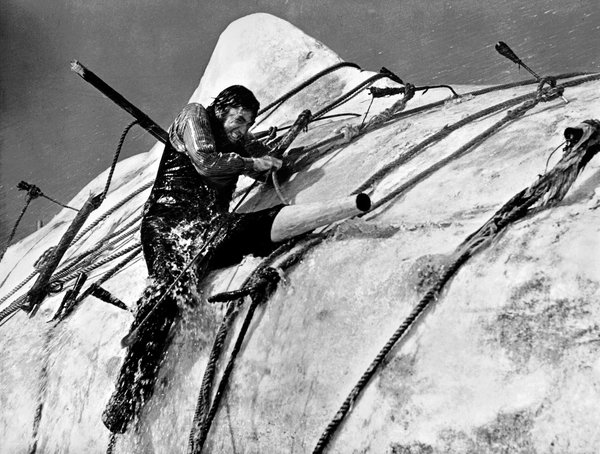 Humankind remains lost in the heart of the dying sea

On the dark shoreline of Henderson Island deep in the South Pacific, Captain George Pollard, Jr., of the Nantucket whaling vessel Essex, hammers away on a makeshift harpoon he’s trying to form over a fire on the beach.

First Mate Owen Chase is kneeling in the sand and watching Pollard pound rhythmically away with what little strength he has left. The two men along with most of the rest of the surviving crew of the Essex, which had been rammed and sunk by a sperm whale as it hunted a pod of whales in the far reaches of the ocean known as ‘the offshore grounds’ weeks earlier, are about to make a break off the island in a final gamble to survive.

Chase, who has the most seagoing experience of the crew and yet seems chastened by their desperate plight, asks Capt. Pollard “What offense did we give God to upset him so?”

Pollard seems unfazed by any suggestion the fate of the Essex and their own bleak odds of survival is somehow divinely ordained. “The only creature to have offended God is the whale,” he replies.

“Not us?” Chase asks. “Not our arrogance, our greed? Look at where we find ourselves.”

But there seems to be no looking back for Pollard, nor necessarily pondering anything beyond the task at hand, lest the creep of doubt as to their true station and the grim tides that swept them to that desolate shoreline overtake him and sap what remains of his flagging strength.

Pollard’s gaze is firelight as he declares to Chase “We are supreme creatures made in God’s own likeness. Earthly kings whose business it is to circumnavigate the planet bestowed to us, bending nature to our will.”

But Chase has clearly come to another conclusion, offering a headshaking assessment to Pollard: “We’re nothing. We’re specks.”

Whether Pollard and Chase actually shared such sentiments together on the shoreline of Henderson Island is likely unknown to only but them, though both men survived the now legendary ordeal. But in Ron Howard’s retelling of the Essex’s epic story in 2015’s In the Heart of the Sea, the scene between captain and first mate provides the moment in the film that Howard uses to make sure one gets the underlying point of his movie: Man’s resourcefulness may have taken him to the top of the food chain on an unforgiving planet, but it’s his own hubris that has carried him to the shoreline of his own oblivion.

Chase and Pollard are two men that may as well be one, an everyman torn between a sense of rightful divine inheritance—entitled to roam the planet ‘bending nature’ to his will—and the sober understanding that such arrogance is delusional and dangerous, leading man to dance amid the glow of the bonfire of his escalating calamities.

In historical fact, the Essex sailed out of the North Atlantic harbor of Nantucket Island on August 12, 1819, and spent more than a year at sea in search of whales that had even by then been driven ever deeper into the reaches of the sea by a slaughter that would parallel the extinction level event that the 19th Century would hold for the North American bison—the whale of the Great Plains.

The vessel’s fate on November 20, 1820, came more than 2,500 nautical miles into the South Pacific, with Pollard and Chase sailing her into the vastness of an ocean they knew could swallow them without warning, driven on by a Cortez-like lust for the liquid gold that was whale oil, the petroleum of its day that lit much of the world and lined the pockets and fueled the economies of whaling towns and villages around the globe.

The behemoth that rose to greet them on that fall day, an albino sperm whale purportedly the size of the nearly hundred-foot long ship itself, obliterated the Essex in just two blows, the fatal strike coming in a head-on charge by the whale that crushed the vessel’s bow as it hurled the 240-ton ship backward into the sea.

One might imagine the sick sense of dread that washed over the crew as they realized their ship was on her way down. Chase later stated in his account of the whale’s attack that Pollard, who had been on one of the whaling boats prowling the hunting grounds when the Essex was rammed, appeared literally speechless as he observed the hulking wreckage that was his ship—and his ride home.

Their reckoning had appeared faster than a squall, hurling itself across the surface in breaches and shallow dives that Chase stated created such a momentum it caused the sea to break violently in front of the whale. In Howard’s film, it is the great white whale that then stalks the survivors of the Essex, following the three smaller whale boats they had crowded onto, playing cat to their mouse as the waves rolled their floating coffins to and fro. But according to accounts from Chase and the crew, the whale was never seen again after it sank their ship.

But the horror was only beginning, as the men of the Essex surely knew it would, watching their meager and already rank provisions dwindle with every passing day. Drinking ones own urine didn’t take long as their parched bodies gave way to the morbid strains of dehydration and starvation.

The cannibalism would come after all but three of the surviving crew made their way off Henderson Island and back into the ocean for a do-or-die drift to either shore or ship or the landfall of death. Howard’s film graciously depicts this ignoble-if-understandable act of sheer survival instinct that seized the men in their broken boats, but he again takes some artistic license, showing the men drawing straws to decide who would be killed to feed the others. In the movie, Pollard the captain gets the short one and bravely orders his teenage cousin to dispatch him, but his young kin suddenly turns the gun on himself rather than shoot his family’s standard bearer.

In reality, it was the captain’s cousin who drew the short stick of death and another crew member drew the lot to shoot him, which he did. And then the men ate. Pollard and another surviving crew member in his boat were rescued some 93 days after the Essex was sunk by an avenging whale. Chase’s boat with three survivors had been picked up by another ship four days earlier. The third whale boat with three crew members in it was never seen again.

The story that emerged from the Essex famously became the groundwork for Herman Melville’s epic Moby-Dick, a novel that Hollywood forever strapped to Gregory Peck as the mad Captain Ahab in the climatic scene, inadvertently lashed obscenely to his bounty and carried to his own death.

But as the bicentennial of the Essex’s fateful final sail approaches, men like Pollard still command the vessel on which we all now sail, but they are not so determined with a steel-eyed conviction that man is destined to make nature bow to his will, but rather stumble around the planet in an almost opiate-like glee, convinced that his latest gadgets will deliver on his whims against a dwindling stock of vital resources.

Confident in our inheritance, whether divinely granted or not, we now squander it in a fashion reflecting the gluttony of an appetite that has no bounds.

The oceans sharks have replaced the skeletal populations of the whale in the crosshairs of man on the high seas, slaughtered by the shadow finning fleets that cast off from the modern Nantucket’s all over Asia’s shores to net them en masse, haul them aboard, slice off their fins and then discard the still-writhing sharks back into the churning red sea. Marine biologists believe these trawlers of death account for killing 100 million sharks—yes, 100 million—annually. Every year. One hundred million.

All to satisfy a culinary fetish for humans from Hong Kong to Los Angeles.

On land, the body count of former apex competitors no longer stack so high because we’ve killed most of them, but lions and tigers and bears and wolves still find themselves on the run as man satisfies himself that pockets of these noble creatures numbering a few hundred here and there will suffice, something akin to fish in an aquarium, to be viewed by the paying masses that marvel at something so beautiful we had to kill it off.

And there are still men like Chase among us, who on that dark shoreline of Henderson Island nearly 200 years ago, sensed that the voyage of the Essex had brought him to a deeper truth.

We are specks. Regal specks in our minds, perhaps, but specks nonetheless, flitting about our small blue marble, telling each other in the cold glow of our technology that still holds the edge of darkness at bay that it’s going to be okay. At least as long as the batteries hold out.

As Chase says in the film: Look where we find ourselves.

Our ship has already been sunk by our own doing.

But our long drift on the open void has only just begun.