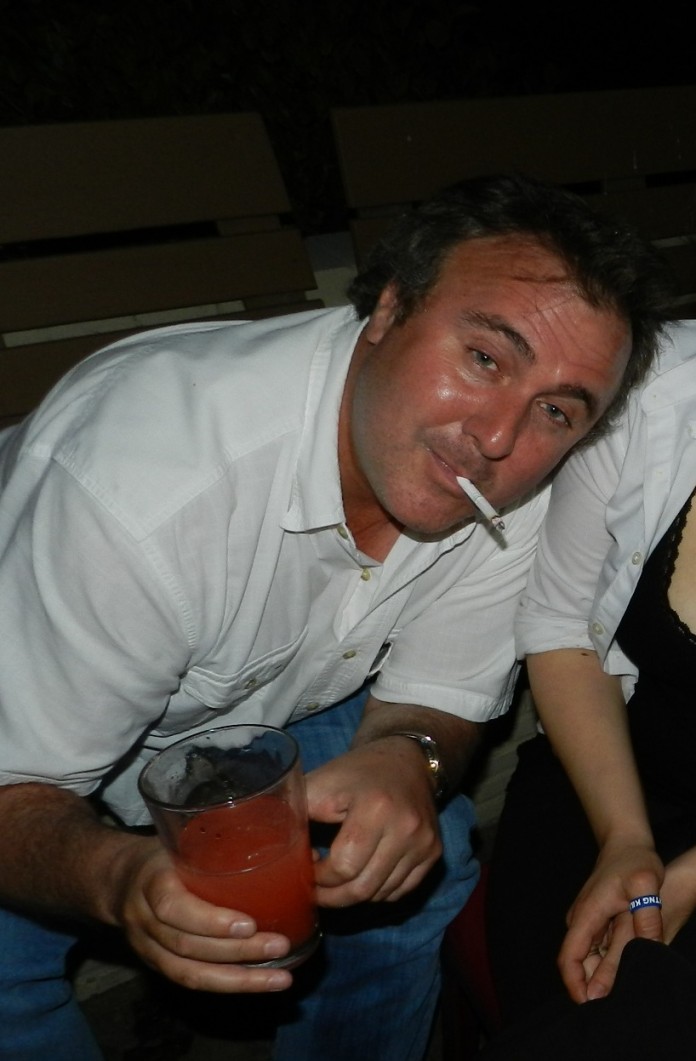 Oh, my friend, I guess it has indeed been a long stretch from those dusty days of the mid and later 1990s, back when we would walk from Sunset Boulevard up to Boardner’s from the Weekly or Cat & Fiddle and saddle up at the bar, order properly from the black dude whose name escapes me and chain smoke as we talked about journalism, politics and pussy.

Those were days when we could agree on a lot of things, Sam. Now, well, not so much, but whatever.

I went out this evening on business with some cop friends, and once that was done, I hung at the bar against their better judgment and offers for a ride home. The Brass Pass. As you well know, a broke drinker with moths in his wallet and an evil woman rotting his heart is still in good shape when he has friends at the bar; in front of it, and behind it. So, I told myself, what’s the rush?

I stayed a little bit late, well, until it was me and the Lebanese bartender and the Mexican dishwasher pouring the long shots as we smoked and argued the finer points of Washington/Moscow/Paris’s subterfuge regarding Palestine and the tragedy of losing Rabin and Arafat before they could make peace irrespective of the Cold War Chess Kings.

You know Sam, some of the best politics I’ve ever talked have been with cabbies, dish washers and barkeeps. Men of a certain age that read newspapers. We may not be able to balance our checkbooks, but we can broker world peace.

Anyway, the lights finally went out and I found myself on the road, and like Quint on the flying bridge of the Orca heading into the open sea, I made my way west on Bonita Avenue for a few blocks before I spotted the first black and white cruising slow, southbound on Cambridge, its dark Christmas tree like a dorsal fin ominously breaking the surface. A Claremont copper sharking the reef, like a slow killer, looking for that wounded fish; bad tail light, busted head lamp or a Mother Mary hanging from the rearview mirror. Blood in the water.

I knew I stunk like an Appalachian still, but fuck it, I kept driving.

I made it to 7-11 on Foothill Boulevard (Route 66), and them sharks Sammy, they still come cruising. Pomona Great Whites, Claremont Tigers, La Verne Makos, Upland Hammerheads, fins everywhere I tell ya, twenty footers. You know how you can tell that when you’re behind the wheel Sam? You look from the Christmas tree to the trunk. And a cop’s eyes are like doll’s eyes; a cop’s eyes are lifeless, black, dead, until he lights you up and pulls you over, and then Sam, oh then, those doll’s eyes roll over white as he sinks his teeth into you, and that high pitch screaming starts, and the water froths red as he tells you “Sir, I’m going to have to ask you to step out of the vehicle” and you bob up like a barrel top, bitten in half below the waist, as you fail the field sobriety test and then blow over a .08.

But like a Gloucester man, I charted my course and made my home, looking in the mirror occasionally and telling myself “I’ll never put on a life jacket again.”

So I sailed my skiff into my Claremont slip safely, and am now considering your dispatch properly, if but for the moment. After all, I’ve got a broken heart and an empty wallet to get drinking on, Sam, so, you know, I can only devote maybe a thousand or two words to this digression tonight. I may well have more to say post-coma, say around Thursday. Shoot a flare and I’ll let you know. But before I sink away tonight, let me offer a few items I think we may well still agree on:

1) Hillary in 2012? If you’re serious, you bet! I voted for her in the primary in ’08, then Nader when my girl didn’t make the ballot. I love Hillary (I also had a major political crush on Shirley Chisholm) and her candidacy would be enough to bring me back to the party. Failing that, Sam, yes, it will be Sarah, whose Pomona campaign slogan should be “Damn, woman! Mmmmmmm, you are fine.”

2) Death Penalty: I can agree on a moratorium going forward, if you’re willing to support the hanging of all the child-killing scum currently on death row whose guilt is not in doubt whatsoever. Meet me half way. Let’s send a message together.

3) Pot: As you know, I don’t really smoke it much anymore (I think my drug of choice is pretty clear to everyone here…), but I’ll support the decriminalization of it to the point of legalization, as long as you’re willing to draw a line there (no legal crack, smack, hack, jack, whatever) and you agree we fully fund treatment-on-demand as well as early intervention for kids with at-risk families, whatever the cost may be.

6) Gay Rights: It seems so strange to even say that term; like “black rights” or “Jewish rights” or fill in the blank. It’s an absurd tragedy, what’s still going on. I think we’ve both stood up and fought for our brothers and sisters who happen to be gay. Right on!

7) Education: We may have different curriculum, but it would seem to me we both want a massive funding of public schools, with the mutual caveat that it doesn’t go down a bureaucratic rat hole.

8) The Environment: Another politically absurd term like “gay rights,” but as an early open supporter of Earth First! (and a closet supporter of ELF), I suspect we’re probably rather close on this issue. I want to reintroduce the Gray Wolf in Claremont, and I don’t mean me.

9) David Cogan & Charles Rappleye: One is a sharp investigator and the other is a brilliant writer; and both are true friends, true brothers. I think we both agree on that.

10) Pussy: We apparently both have similar tastes, in terms of party girls, or at least that’s what Cogan was shouting at me that night in Vegas. “You and Sam like those hard looking women, the dirty chicks! Fuck that! It’s my party, take me to a nice joint!” So we do have that, too, Sam. Here’s to the dirty girls, God bless’em.

Anyway, Samuel, as far apart as we may be these days…I think we still have some things we can dance to.