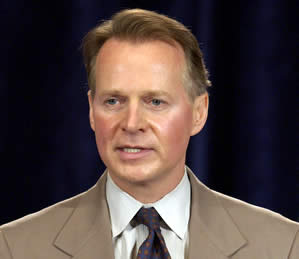 Republican Congressman David Dreier’s closeted gay life has been zealously guarded by Southern California newspapers for more than a quarter of a century. MARK CROMER explores the broadsheets policy of protecting Dreier even while the GOP wages its legislative Holy War on gay Americans.

When congressional Republicans selected Rep. John Boehner from Ohio as their House Majority leader last week, newspapers throughout Southern California quickly filled with details about the back-slapping, party-insider the GOP had turned to amid a growing corruption scandal.

Pundits pondered whether Boehner was a wise choice for a majority party that’s deeply mired in a vote-selling scheme the Republicans brazenly called ‘The K-Street Project,’ aptly named after Washington’s fabled lobbyist row.

Yet the real story—the real indication of just how hopelessly infected the beltway has become with hypocrisy, secrecy, dirty deals and an unbridled lust for power that permeates within both parties—was not Boehner’s come-from-behind ascent to the leadership position in the GOP.

No, the real story was who didn’t get the job, even as a temp.

That story’s name is David Timothy Dreier, and it was nowhere to be found in the newspapers that serve Dreier’s district, as usual. From the arrogant powerhouse Los Angeles Times to the backwater hack-sheets of the Inland Valley Daily Bulletin and San Gabriel Valley Tribune, nary a mention of what happened to Dreier—or what didn’t happen to him—made the papers.

Granted, that Dreier didn’t get the nod from his party is not a huge story per se, but why he was never honestly being considered is one hell of a story, one brimming with sex, money, power and bigotry. As journalists like to say, it’s “a good read.”

Why Dreier’s hometown newspapers continue to religiously ignore this story is an even bigger headline, one that illustrates just how cozy under the covers some journalistic institutions have become with a government they are supposed to keep honest. Writers like Robert Novak, Judith Miller and Matt Cooper are just the tip of the iceberg in a malignant confidence game that rewards personal access over professional integrity. It’s a game that has spread far beyond Washington and New York.

Dreier, the sun-tanned, Tele-slick, 12-term Congressman from the 26th District in California who was a young protégé of President Reagan in 1980, has lived as a semi-closeted gay man who has shown no compunction whatsoever in joining the Republican’s cultural war against gays. Dreier’s friends, family and close associates know that he is gay, so do the newspaper reporters that cover him.

Yet the average voter in Dreier’s district is likely unaware that he is gay, which is just the way Dreier—and the newspapers—wish to keep it. The prototypical Betty Bluehair Republican isn’t likely to research the issue on the Internet between teas at the Ritz-Carlton.

Dreier’s political paradox finds him simultaneously cavorting with his chief of staff and long-time companion Brad Smith (reportedly living with him as well) while making common cause with his party to strip gays of basic protections, from employment law and hate crimes legislation to the GOP’s kamikaze attacks on the radical notion of allowing homosexuals to say ‘I do.’

Thus, Dreier’s unflinching loyalty to the Republican platform and his skill at publicly living a charade has served him well in the GOP, just as he long as he never seriously hoped to reach beyond representing a safe congressional seat. The party leadership has been quite comfortable to allow him his seat and to chair the powerful House Rules Committee, but that’s where the leash ends.

This inner-party glass ceiling was blatantly on display again last September when Dreier was knocked out of the box after Majority Leader Tom DeLay stepped aside following his indictment over alleged campaign finance violations. Though Dreier was initially named as a potential (and obvious) temporary successor to DeLay, he was quickly shunted aside by GOP leaders who were eager to avoid provoking the radical Christian Right by naming a gay man, even a closeted one, as an interim majority leader.

A staffer at the Daily Bulletin called me up right after Blount had been named interim leader and sardonically laughed that the newspaper’s readers were treated to a now well-established magic routine: Now you see Dave, now you don’t. The newspaper, he noted, reported that Dreier was a serious contender for the leadership post, but in the ensuing shuffle Dreier’s supposed candidacy simply evaporates and little if any contextual explanation is offered.

Since the newspaper’s reporters and columnists are absolutely forbidden to address the issue, even obliquely, Dreier’s supposed promotion ends up looking like a bad Christmas decoration that is left hanging outside long after December: everyone sees it, no one says anything and then one day it’s just gone.

It’s a trick the Daily Bulletin and Tribune have been playing on its readers for years. Every time Senator Barbara Boxer comes up for reelection, the newspapers float Dreier’s name as a serious contender for her seat. Dreier nails his stage marks like a pro, coyly “not ruling out” a run he knows he will never make. The Republicans come up with another sacrificial goat and Dreier goes back to counting the mountains of cash in his epic campaign war chest.

The reasons for protecting Dreier’s sexual identity differ between the Los Angeles Times and the smaller Tribune and Daily Bulletin, but there are common threads that connect them.

In the Times case, the primary issue seems to be one of shielding Democratic sacred cow Art Torres, chairman of the California Democratic Party and himself a closeted homosexual.

This was explained to me recently over dinner with a former Times writer and a veteran Los Angeles journalist who covers both Sacramento and Washington. She explained that the editors at the Times fear that by exposing Dreier, the newspaper could set off a chain-reaction that might force them to ‘out’ Torres, or risk being seen as hypocritical.

Since Torres is a Latino and a Democrat, the Times is loath to expose his sexual identity, a revelation that could seriously erode his support in the Latino community and ultimately force him to give up his chairmanship of the party.

“It basically comes down to Torres,” she said. “If they go after Dreier, they are afraid of what might happen to Art.”

The Daily Bulletin and Tribune, both owned by Texan GOP contributor Dean Singleton, harbor no such concerns about the political fate of Torres when they consider the subject of Dreier’s sexual identity verses his congressional voting record.

The dynamic between the newsrooms at these newspapers and Dreier is much more personal and, in many respects, far easier to understand.

Voters first sent Dreier to Washington in 1980, a time when the Daily Bulletin was a backwater operation owned by the rabidly rightwing Don-Rey Media as two separate newspapers: the morning Daily Report in Ontario and the Progress Bulletin, an evening newspaper in Pomona.

By the time Don-Rey merged the newspapers into the Daily Bulletin in 1990, the beaming mug of David Dreier hung on the office walls of publisher Dave Caffoe and Executive Editor George Collier.

The Tribune, meanwhile, was run by F. Al Totter; a red-faced, vein-popping Republican so bitterly partisan in his editorial slant that for a time he forbade any news photo to appear in the newspaper that depicted union pickets or protestor signs—lest the paper become a shill for some Leftist rabble. Totter was known for firing staff writers for not keeping their desks tidy and, at least in one case, fired a reporter for not wearing a tie to work.

When Totter finally died on May 19, 1997, Dreier took to the House floor a few days later and recited a tribute to the former publisher, hailing him as one of the San Gabriel Valley’s “most eloquent and reasoned voices.” Dreier read into the Congressional Record his own remarks that had been published in the Tribune’s front page obituary of Totter, gushing the Totter was “the conscience of the Valley, and that really does describe him.”

Like the suits who ran the Bulletin, Totter could tolerate Dreier’s sexual identity as long as he hid it while voting solidly against what Totter used to thunder was a “homosexual agenda” out to rob businesses the right to fire queers.

From 1980 through the mid-1990s, reporters at the Daily Bulletin, the Tribune and its sister newspapers, the Whittier Daily News and Pasadena Star News, simply could not touch the issue of Dreier’s sexuality and hypocrisy. As a former reporter for all of those newspapers at various times during those years, I can say that we didn’t need a memo to understand what the consequences would be if we even broached the subject with the congressman.

The framed photo of Dreier hanging in the publisher and editors offices was truly worth a thousand words.