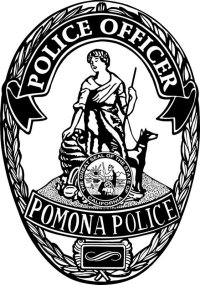 Pomona PD faces the end of its own thin blue line

Six years ago the Pomona Police Department rolled through this hard luck city in a fierce display of serious force, unleashed by a City Council that was seemingly intent on sending a message to its largest and most venerable street gang that it had gone too far.

In late April of 2004, California Highway Patrolman Thomas Steiner was gunned down as he walked out of the Los Angeles County Court in Pomona, brazenly murdered by a thug looking to make his bones with 12th Street, a gang on Pomona’s southside that dates back to the 1940s.

Steiner’s murder sent his 16-year-old admitted killer, Valentino Mitchell Arenas, off to the joint with no hope of anything more than state gruel and prison sex for the rest of his miserable life.

It also sent the City of Pomona on the warpath.

Shortly after Steiner’s killing, more than 450 lawmen from police and state agencies all over Southern California fanned out across the city with Pomona PD at the spear-point of what remains the biggest municipal ass-kicking ever handed to the homeboys of 12th Street. It was a city-provided colonoscopy that had even the toughest veteranos wincing.

Civic leaders and police brass vowed to crush the gang once and for all.

So there’s more than a little irony in the fact that six years later, with 12th Street predators still prowling their barrio in search of new victims, it is the local police that now face an existential threat—not from the gang, but from the suits in city hall.

A grim budget deficit in Pomona has led the city from cutting its century old force down in size to considering dissolving it altogether and contracting with the Los Angeles County Sheriff’s Department to patrol the city. The possible extinction of Pomona’s police comes as the economically battered city remains the home of 18 active street gangs with approximately 2,000 members, more than 400 of whom claim 12th Street, according to police gang detectives.

The city council’s decision in April to ask the sheriff’s department to deliver an initial study that would project the costs of contracting its services touched off a firestorm in Pomona that swept from its rank and file cops across the city’s neighborhoods. As yard signs declaring “Our Safety, Our Police” began sprouting, the Pomona Police Officer’s Association condemned the council’s decision as a brazen betrayal.

Rob Baker, president of Pomona’s police association, said that City Manager Linda Lowry has taken not just a hard line in budget negotiations, but an insulting and provocative tone.

“Morale is at the lowest point that I have seen in my 22-years of service. Morale is lower than when [Pomona Police Officer Daniel Fraembs] was murdered,” Baker said. “I can tell you my morale started to drop when in negotiations with the city, back on March 23, in our very first session, and Lowry made the statement that ‘concern for city employees was not a luxury she could afford.’ I can tell you that was the turning point in my morale.”

While there has been some speculation that the council’s exploration of disbanding the police force was pure positioning for budget negotiations, Baker said the department faces a serious challenge to its existence.

“Do I think it is a negotiating ploy? I don’t. Do I think they support it? I think several [council members] support it because it will be one less collective bargaining group that they have to contend with in the city,” Baker said. “And I think it is a real threat to eliminate the police department.”

Calls and emails to Lowry’s office seeking comment were not returned.

Baker said that police have more than shared in the pain from the city’s financial bleed-out, with the local force that a few years back had more than 200 sworn officers now down to 173 sworn officers and facing the layoffs of possibly a dozen more. Baker said the department’s 2011 budget line of $39 million is likely to be slashed down to around $35 million in another round of cuts.

For its part the sheriff’s department has publicly taken the position that it did not shop the city its services and is merely responding to the council’s request for an initial feasibility study.

“What’s in it for us? Simply what we are doing is responding to the City of Pomona’s request to provide them with an estimate for deploying and doing police services in the city,” said Capt. Bruce Fogarty of the sheriff’s Contract Law Enforcement Bureau. The sheriff’s first report will be analyzed by an independent contractor retained by the city and, if approved, followed by a second and far more detailed plan for services. Pomona voters would have the final say on the November ballot.

While legendary Sheriff Sherman Block—who in death still garnered more than a third of the vote in 1998—was said to have long desired to win the trifecta of adding Pomona, Pasadena and Long Beach to his department’s roll of contract cities, Fogarty said that Block’s predecessor was not interested in empire.

“I don’t have anything from [Sheriff Lee Baca] that we want to expand the department this way or that way or anything,” Fogarty said. “This is simply: we get the request and we do our best at giving them an estimate and leave it in the city’s hands. If the sheriff felt we would not able to do a particular contract we would not even enter into Phase 1.”

The sheriff’s initial report, delivered to Pomona last week, claimed to offer the city a savings of nearly 10-percent from what it is currently spending on it own police force, while increasing sworn personnel by 11-percent.

Though the sheriff’s department may not be directly campaigning for a contract with Pomona, the city’s cops accuse the Los Angeles County Fire Department of using political back channels to push for the city to dump its own force, evidently to secure its own budget position. Pomona dissolved its own fire department in the 1990s and contracted fire services from the county.

Police point out that International Association of Fire Fighters Local 1014 President Dave Gillotte, in a message posted on the union local’s website, demanded that any cuts in the fire services budget “must be tied proportionally” to cuts in the city’s police budget.

“Why would it be any of his interest as to what type of law enforcement services are provided in Pomona when it has nothing to do with county employees, let alone the fire department? It really is apples and oranges,” said officer Glenn Stires, a Pomona native and 21-year street veteran on the force.

Stires, speaking as a member of the PPOA, said the sheriff’s initial report reminded him of a predatory mortgage broker peddling smoke and mirrors financing at the height of the housing bubble. “They know the cost is going to jump up in the following years, but they disguise it and talk around it,” he said. “They just want the buyer to sign on the bottom line.”

“If Pomona contracts with the sheriff’s department we will see the same decline in quality of service that we saw when we transitioned from the Pomona Fire Department to the Los Angeles County Fire Department,” Stires said. “Pomona Fire had what I describe as a professional hustle. You don’t get that with LA County Fire, at least not in Pomona.”

Union head Gillotte said assertions that the firefighters union was pushing the council to bring in the sheriff’s department were simply false.

“No, we are not advocating,” Gillotte said. “If the City of Pomona wants to keep Pomona PD—and their POA obviously is supporting that—to keep a small, very expensive police department as the locally controlled police department, then that’s fine. That’s up to the citizens and elected officials.”

But Gillotte was quick to add that the union would come back swinging hard at efforts by the police association or community groups that are demanding reductions in the fire department’s budget to spare the police from additional cuts.

“We will not allow money to be taken out of the fire end of things for assertions that ‘if only fire will give we could keep our PD,’” Gillotte said. “We have already saved the city millions of dollars. So if you want to keep Pomona PD, our position is you find a way to finance and fund it but do not try to take it from the fire department funding.”

Pomona was considering eliminating two fire stations and building a new one, ironically using money that had been set aside for a new police station. That measure was recently killed by the council.

Gillotte agreed that the public safety air in Pomona was starting to thicken with acrimony, but that it was largely the product of rank and file cops misunderstanding or mistaking the intent and goals of the firefighters.

“I think there is a level of friction where beat cops think that firefighters are advocating to undermine them and take them out of service and put sheriff’s in, which is untrue,” Gillotte said. “We want to be supportive of beat officers one hundred percent in doing our job, and we expect the same in return.”

While Pomona cops may have some bad vibes about county firefighters right now, the city council’s decision to consider contracting with the sheriff’s department has left them with the sensation of a shank buried deep in their back.

“We clearly see the loyalties of the city council, some who have been aided by the Local 1014 County Employees in their political aspirations, we see where their loyalties lie,” said Stires. “And it’s not with life-long city employees or city residents, it’s not with a department whose officers have given mind, body and, in one officer’s case, soul to the city. We’ve been betrayed.”

Last week not a single sitting council member was present among the 180 community members that gathered at a local lodge to honor seven veteran Pomona cops with about 200 years of service between them that are retiring. Speaking at the event, former city councilman George Hunter noted the absence of current council members, then joked that the fire department must have had an event the same night.

Dark humor and rueful chuckles aside, perhaps the last laugh in this city has to go to the homeboys of 12th Street, who on some level must marvel that the city council is toying with the gang’s pipedream of Pomona PD vanishing from the streets.

Whether the council presses ahead to disband its cops, perhaps the vatos owe City Hall a ‘thank you’ card for everything it has done.