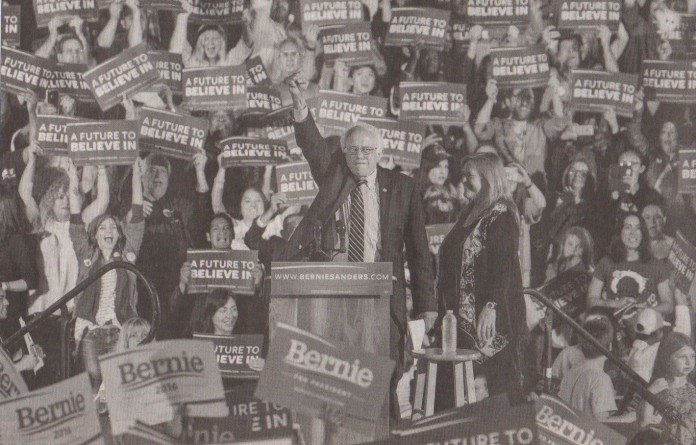 Once a daring symbol of actual defiance, a clenched fist raised in the air today has become the Left’s Nuremberg mass salute of compliance

The image captures Sen. Bernie Sanders onstage Tuesday night in an airplane hanger in Santa Monica, California, after he had just been crushed in the state that had offered his last hope of unraveling Hillary Clinton’s march to the Democratic nomination in Philadelphia next month. Sanders stands soldier-stoic, jaw-clenched in a grimace (like Hillary’s behind him with a strap-on), his right hand balled into a fist and thrust into the air against a backdrop of jubilant Millennials convulsing in mid-orgasm him as his wife gazes upon him in adoration.

Published without a photographer’s credit (Leni Riefenstahl is dead, so who?) in Wednesday’s print edition of the Los Angeles Times, the picture commits to history the surreal scene of a multi-millionaire power-player with a four-decade career as a politician standing tall in a West Coast bastion of fashionable wealth and offering what has effectively become the Nuremburg salute of the Left.

Well, maybe that’s not so surreal after all.

Once a daring symbol of actual resistance a half-century ago, raising a fist in America today has become merely the gestural password of compliance that’s enforced on ideologically cleansed university campuses and celebrated in Beyoncè halftime shows, devolving from an actual revolutionary act to transparent mimicry among the group-think set.

What was once unpopular and dangerous is now not only accepted but expected.

In early 2015, ‘Je suis Charlie!’ became the feel-good mantra of the moment onstage at Hollywood’s Love Thyself Awards, so if Donald Trump prevails in November no one should be surprised when George Clooney takes to the microphone in January 2017 only to shout ‘Fight The Power!’ and then drop his head in faux solemnity as he thrusts a clenched fist into the air as the nine-figure annual income crowd leaps to its feet roaring their approval while the camera pans to a lone Julia Roberts remaining seated as she plays a mean three-finger fiddle diddle south of her equator as her Great White jaws yawn wide and her head jerks to and fro as if devouring a seal while Ellen circles her with a smart phone to post ‘As It Happened’ snaps on Instagram.

Sanders’ salute on Tuesday demonstrates just how cheap the currency of so-called revolution has become amid this inflationary era that has treated America to the absurdist spectacle of students attending colleges-turned-spas only to writhe and wail about being ‘marginalized’ over improperly prepared sushi and the crushing weight of sombreros on Cinco de Mayo. In 1968, Tommie Smith and John Carlos stood in Mexico City’s Olympic Stadium and raised their black-gloved fists from the medalists’ podium as the American national anthem was played, riveting a world that viewed it either in admiration or disgust. However one viewed it, it was unquestionably a bold act of defiance, peaceful and potent. Disgraceful to many and inspiring to many more, but they registered their point in a powerful fashion and most notably, they did it in front of a crowd—not playing to it.

Smith and Carlos paid a hefty price for their political protest in 1968, being booted from the team by the International Olympic Committee while the games were still in play and sent home where they were greeted with death threats.

Less than two years later, in the aftermath of the Ohio National Guard opening fire on student protestors at Kent State University, the clenched fist as a battle flag spread throughout the white counterculture, sprouting everywhere from backpacks to the bass drums of bands like The Grateful Dead. Its rapid spread as a symbol of subverting the strictures of the prevailing social order did little to lessen the potency of its punch throughout the early 1970s, even if it was overtaken and eventually smothered by the benign smiley face that simply advised ‘Have A Nice Day!’

But while the raised fist may have retreated into the ideological backwaters that sheltered the Weather Underground alums still on the run as America slipped into and then out of the hot tub as the 1970s closed out and they turned in their Quaaludes for some blow as they headed into the club scene of Reagan’s 1980s Less Than Zero-a-go-go, it never really vanished. Like an old battle standard from glory days gone by, it was rediscovered, dusted off and redeployed with all the credibility those former Weathermen could muster, donned as their paunches were in Chè T-shirts, swilling Starbucks and drawing paychecks from the taxpayers as faculty of a state system they vowed to smash but a generation earlier.

And from there the Holy Fist quickly became the province not of revolutionaries, but of the liberal reactionaries that had seized the campus apparatus not through bombings, walkouts and strikes but a slow war of attrition that focused on faculty appointments and curriculum adjustments. Just as the peace symbol is a close cousin of the Mercedes Benz logo, the clenched fist became the marketing logo of ultra-capitalists like Howard Stern as he made his exit from terrestrial radio (and cultural relevance) and transitioned into satellite radio.

Stern plastered the clenched fist in billboards all over the nation, apparently advising his former listeners that the barricades of the ‘revolution’ were moving not down the dial but off it altogether. For those that didn’t remember Country Joe giving the ‘FUCK’ cheer at Woodstock and what that rousing call and response among the muddied tribe at Yasgur’s farm really meant, Stern’s decision to move to satellite radio 25 years later so he could say ‘fuck’ at will as he tossed cuts of baloney at porn stars asses before retiring for the day to his mid-Manhattan penthouse must have seemed like a revolutionary act indeed.

But as hollow as the clenched fist became when it morphed into a marketing logo for the consumer masses, as the years passed it regained its iron strength as a calling card amid the politically acceptable circles on campus, to reemerge as an invigorated symbol not of defiance against an oppressive orthodoxy, but rather the orthodoxy’s hammer (and cycle) that greets those who dare defy the Party Line.

And as such, it is now the Left’s salute.

So in defeat, Sanders did what he knew his crowd would eat up as victory amid the rubble; he thrust his clenched fist into the air. Viva la causa!

That most of them stumbled home afterward unemployed to their room at their parents’ houses while Bernie boarded a jet that whisked him off to the White House for negotiations over how the EBT show will go on in Philadelphia mattered not.

Bernie threw his fist in the air. He offered the salute and the crowd got off. It’s just a shame he didn’t flash the peace sign. That would have been more him, more real, much more needed now than another fist in the air.

Instead, we were treated again to Triumph of The Shill.