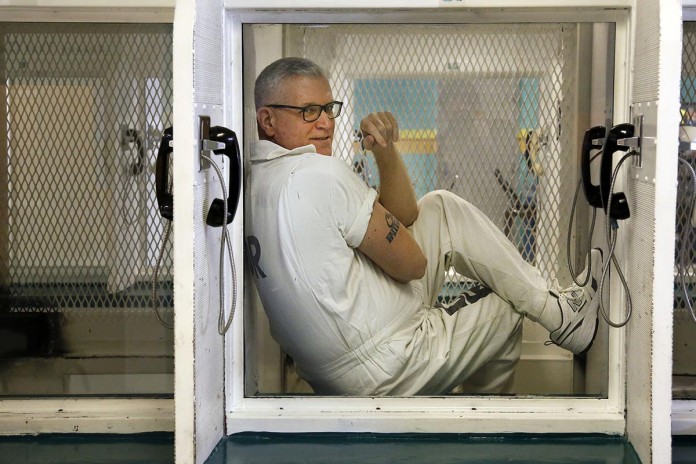 Californians—like most Americans—continue to face the long con of delays, deflections and denials in the hope of seeing the death penalty restored and justice finally done

As the last hours of March 2016 fall away from the calendar, so the last hours of the life of convicted child-killer John Battaglia appear to finally be running out. Fifteen long years after Battaglia mercilessly executed his own nine-year-old daughter Faith and her six-year-old sister Liberty—shooting them to death while they were on the phone with their mother so she could hear the horrifying carnage—it appears he is now just hours away from his date with the ‘hot shot’ that will put him to sleep and then stop his heart.

That Battaglia is on death row in Texas significantly improves the odds he will finally get the needle. As will perhaps Battaglia flashing a smile as he told a reporter from The Dallas Morning News: “I don’t feel like I killed them.” After murdering the children in his loft in the Deep Ellum neighborhood in Dallas to punish his wife, Battaglia walked down the street to a tattoo parlor where he hung out until police found him.

In a 2014 story published on convicted killers that had murdered family members, the child-killer was allowed to pose for The Dallas Morning News in the interview booth; flashing another smile over his collared shirt, his one of his New Balance tennis shoes propped against the booth’s wall.

The Texas Board of Pardons and Paroles turned down Battaglia’s clemency petition on a unanimous vote of 7-0, evidently concluding that a now 60-year-old man who had no mercy for his own daughters deserves to be shown no more in this world. His attorneys are now working around-the-clock on the taxpayer’s dime to save his life.

If Battaglia is strapped down to the tourquise-gurney at the Texas State Penitentiary at Huntsville and killed as scheduled sometime after 6 p.m. on March 30th, then it will be long-delayed justice for Faith and Liberty and a rare victory for the majority of Americans who have watched capital punishment be slowly strangled to death by quietly gleeful bureaucrats and bench activists who are oppossed to it.

In 2013, the five killers on Maryland’s death row awoke on St. Patrick’s Day to find the Democratic-controlled General Assembly greeted them with a fine ‘top a’ the morning to ya!’ by passing a bill abolishing the death penalty, which Democratic Governor Martin O’Malley was so eager to sign he would have run down any victims’ rights advocates that stood in his way. Though polls in the Old Line State show a majority of Maryland’s citizens support capital punishment, the popular will proved no impediment to the legislators, any more so than the horrific nature of the crimes committed by the condemned.

Here in California, 2016 is going to be another good year for the 743 convicted killers currently cooling their heels on death row.

Shortly after voters rejected another effort to abolish the death penalty in California in November 2012, State Supreme Court Justice Tani Cantil-Sakauye—perhaps channeling her inner-Rose Bird—declared that it would be at least another three years before executions will resume.

Thus the likes of Richard Ramirez—the ‘Nightstalker’ killer who slaughtered at least 14 people in his killing spree across Greater Los Angeles from 1984-85—was able to run out the clock and justice in the case of People of California v. Ricardo Leyva Muñoz Ramírez and die peacefully in a Marin County Hospital on June 7, 2013.

Less than a year after Ramirez began his hot date in hell—which for all his Satanic mugging in the press he apparently was looking forward to—Washington State Governor Jay Inslee did his part for convicted killers everywhere by issuing a mortorium on the death penalty in the Evergreen State, sparing nine convicted killers their dates with destiny. In grand fashion now all too familiar to the families of victims, Inslee declared that he believed the death penalty was too arbitrary and said he was “not convinced equal justice is being served” by executing convicted killers.

Notably missing from Inslee’s decree was any evidence whatsoever that the nine killers on the state’s death row in Walla Walla were wrongly convicted. No, Inslee did not state that the killers on Washington’s death row weren’t, well, killers. He just believes that their lives—far more than the brutal deaths of their victims—deserves greater discussion and consideration among civil society.

In states such as Maryland and Washington, the majority of Californians that want justice delivered have seen their popular will fall victim to a relentless pattern of obstruction from governing elites that are hell-bent on imposing their prerogative at virtually any cost, including the continued torment of the victims’ families.

Abolitionists hope that public frustration will eventually ferment into civic despair and ultimately lead the majority of voters to abandon the issue as a lost cause. Though Californians have long supported the death penalty, even the state’s moribund Republican Party seems paralyzed on the issue that once delivered it handsome political dividends.

No other state epitomizes the surreal nuances that have defined the long battle over the death penalty more so than California, which has nearly as many convicted killers awaiting a lethal needle as Texas, Virginia, Oklahoma and Florida combined

While the Lone Star State’s brisk pace of shuttling condemned inmates onto their gurney-ride into oblivion has raised the chagrin of opponents and the admiration of supporters, the Golden State has risen as the Anti-Texas: a place where the public’s demand for justice has been wheeled into the tar pits of bureaucratic malfeasance and judicial sabotage.

For it is here in California where an elite clique whose power lines crackle across academia, the media and fellow travelers salted throughout the state and federal judiciary, have feverishly thrown everything imaginable into the effort to delay executions to the point where inmates on death row are now more likely to die of natural causes—as ‘The Nightstalker’ did—than in the execution chamber.

In July 2014, U.S. District Court Judge Cormac J. Carney (a jurist who this writer has interviewed at length) ruled that California’s death penalty was “cruel and unusual punishment” and therefore unconstitutional. Carney issued the ruling in response to a petition by Ernest Dewayne Jones, a confessed killer who brutally raped and then stabbed to death Julia Miller in 1992. Though his guilt in the rape and murder of Miller has never been in question and though a jury of his peers sentenced him to die in 1995, Carney effectively ruled that the state was taking too long to do so.

And so it is during this long winter of justice delayed that opponents ceaselessly attack the death penalty by arguing an ever-evolving rationale for why murderers must be spared even while the ultimate punishment is dispatched to the cold grave of history—throwing up every obstacle to executing those killers for whom guilt has never been in doubt and then, as with Carney, arguing that it has taken too long now for it to be fair.

Thus death penalty supporters are simultaneously denigrated as being the modern cultural descendants of lynching parties, and yet passionately implored to summon their inner-Swede and embrace the enlightened perspective of the European Union.

Among the erudite cosmopolitans that demand an end to capital punishment, malleable academic studies supporting abolition of the death penalty become divine scripture while the terrifying bloody carnage left in the killers wake become inconvenient ‘anecdotal’ outliers in a debate they’d rather not engage.

When bilious hectoring and moral persuasion fail to sway the majority, death penalty opponents promptly don the costumes of fiscal conservatives and pretend that their objection to capital punishment is based upon being cost conscious stewards of the criminal justice system in a cash-strapped state. The death penalty is a financial drain, we are told, and the financially prudent approach to administering justice is to eliminate it in favor of life without possibility of parole.

This objection is pure lysergic-laced Theater of the Absurd, a trip down the rabbit hole and into a Twilight Zone where those who have employed every possible contrivance to delay executions then cynically pivot and declare that executions take too long, cost too much and are too sporadic to effectively be carried out with any hope of deterrence.

Failing to convince—or dupe—voters on that score, opponents of the death penalty attack the state’s method of administering the coup de grace of justice, even though murderers are now clinically dispatched in essentially the same manner an animal is ‘put to sleep.’ Not satisfied with removing the hangman’s noose, the firing squad’s count down, and ‘Old Sparky’s’ voltage regulator from the process, death penalty abolitionists now claim that the hot shot of sodium pentothal pumped into a killer’s arm might cause a moment of pain and thus qualifies as Constitutionally-prohibited cruel and unusual punishment.

The effectiveness of the abolitionists’ long con can be seen in the numbers of executions carried out in California since the state reinstated the death penalty in 1974 (with the U.S. Supreme Court giving states the go ahead to resume executions two years later), as only 13 convicted killers have faced their due punishment in the nearly 40 years that have followed.

In contrast with the molasses-like drip of justice in California, Texas has executed 492 condemned inmates since 1976, Virginia 110, Oklahoma 102 and Florida 74; with those four states accounting for more than half of all executions in the United States since reinstatement.

Given the comments of Chief Justice Cantil-Sakauye, it would seem that ratio will remain static, at least for the time being.

Yet however long the road may turn out to be, the perseverance of a solid majority of Californians will ensure that one day the perpetrators of some of the most horrific murders in our state’s history will face justice at the hands of the people.

That day will be worth the wait.

And in Texas, for the grinning child-killer John Battaglia, the waiting looks to be just about over.