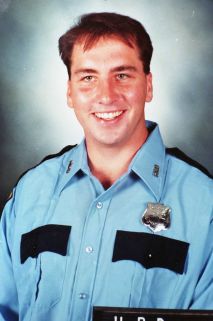 [This is a dispatch to Los Angeles Times writer Molly Hennessy-Fiske, who was covering the planned and then carried out execution of convicted cop-killer Edgar Tamayo Arias, who murdered 24-year-old Houston Police Officer Guy Gaddis a full 20 years earlier in an execution-style killing—shooting him three times in the back of the head. Tamayo was an illegal immigrant who had been previously deported following numerous arrests for violent crimes. Officer Gaddis, a U.S. Army veteran from the Iraq War Desert Storm, is the featured photo.]

Subject: Your 6 to 1 Source Ratio in the Tamayo Story

As a journalist (including freelance stints for the Times back in the 1990s) I was pleased to read your story in today’s editions of the paper that chronicled the ongoing protests surrounding the scheduled execution of convicted cop-killer Edgar Tamayo.

We both know that while illegal immigration is the most carefully managed news subject the Times covers—with sources, quotes, subtext and story placement all diligently scripted and staged to support the Times ideology and its editorial position—the death penalty runs a close second. And in Tamayo’s case, the two collided in the brutal murder of police officer Guy Gaddis.

And you didn’t disappoint.

Your story featured no less than least six perspectives in support of clemency and a retrial for the killer, including Mexican Gov. Graco Ramirez, who defined the punishment as essentially a racist lynching and attempted to cast doubt on Tamayo’s guilt in spite of overwhelming evidence. At the end of the story you offer a single quote from a press aide to Gov. Rick Perry in support of the sentence being carried out. Not a single word, of course, from a source in support of the death penalty in general and attacking the opposition to its imposition in this particular case.

Utterly absent from your story was any meaningful detail about the life of 24-year-old Gaddis (lest the victim become human, I suppose), who took three bullets in the back of his head from an illegal immigrant that had served prison time in California for robbery before being deported, breaking back into the country and continued his crime spree and murdering Gaddis. Yet while mentioning the summary execution of Gaddis only in passing and completely erasing the pain and suffering the killer inflicted on his family and friends, your story carefully devotes space to the life and struggles of your mijo, Tamayo, whose cold-blooded slaughter of Gaddis you frame as the consequence of alleged disabilities and, of course, American racism.

As such, given that Gaddis was a white male in a position of authority, perhaps the most striking aspect of your story was that it didn’t explicitly state that Gaddis deserved to die, given that he was an instrument of an oppressive system of white privilege that wages war against peoples of color; etcetera, etcetera.

Anyway, nice read Molly, so light a votive candle and try not to weep through too much Kleenex today if your mijo’s date with justice is finally carried out two decades after his murder of Guy Gaddis.