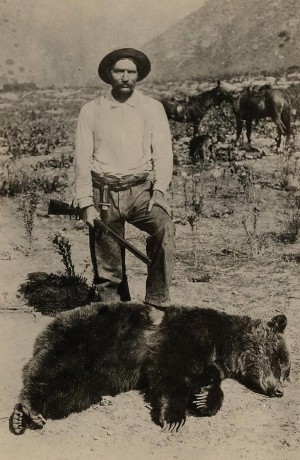 Mark Cromer is rooting for the bears

It’s hard to imagine now that at one time in our nation’s history the grizzly bear roamed the American countryside in numbers believed to have reached well into six-figures, an apex predator that ranged from south of the Rio Grande to deep inside the Alaskan hinterlands, from the Great Lakes to the San Francisco Bay.

But then, the buffalo also once roamed the Great Plains in vast seas of rolling thunder.

The epic slaughter that brought both species to the brink of extinction long before the dawn of the 20th Century (the last California Grizzly in the wild was gunned down in the 1920s) is well documented and generally known among average Americans today, though just how few grizzly bears remain in the Lower 48 outside of Yellowstone or even in the park is likely less well known.

And Uncle Sam, with his trigger-finger feeling that familiar itch again, would like to keep it that way as the United States Fish & Wildlife Service seeks to drop protections for the bears and give ‘big game’ hunters the green light to open fire.

In Yellowstone National Park, which spans an area across the three states of Idaho, Wyoming and Montana, efforts to save the grizzly bear have been declared such a smashing success that ‘wayward’ bears are drifting off the park and into areas where they are encountering humans and killing ranchers’ livestock. Or more simply put: they are being bears. Throughout the march of man across the globe, such a human v. animal dynamic has historically not ended well for the species opposite man. With virtually every former apex predator on the planet driven to the brink of oblivion as they scatter and run for their lives amid staggering habitat destruction that affords them ever shrinking places to hide, the proposition that humans now need to kill even more grizzly bears in order to ‘better manage’ their minuscule population is a perverse testament to man’s deified self-image.

Or as old J.R. Oppenheimer put it so succinctly on that dusty New Mexico test range: ‘I am become death, the destroyer of worlds.’ Yep, that’s pretty much been man’s business card since even before the Industrial Revolution really got things cooking.

By 1975, the wanton slaughter of grizzly bears had pushed less than 150 remaining bears into Yellowstone and biologists predicted imminent total extinction of the bear in the Lower 48 if immediate protections weren’t imposed and enforced.

Forty years later, the sweet aroma of a successful ‘recovery’ of the grizzly bear—by the federal government’s standards—are approximately 700 bears that are now bottled up in a national park where the larger ecosystem is facing a variety of other challenges, including a bark beetle infestation that is killing one of the grizzly’s primary food sources, the whitebark pine tree, which produces nutrient rich nuts that Yogi loves.

As the grizzlies have begun to move off the park to search out less competitively stressed foraging grounds they encounter hunters, ranchers and other potentially deadly obstacles of the human-wild interface. The government’s ‘zero-tolerance’ policy of bears that attack humans offers instructive language, framing the bear in terminology usually reserved for criminal behavior.

The solution, as Washington now sees it, is to green-light ‘discretionary mortality’—the term it now uses to describe hunting. If the agency’s plan proceeds and survives a certain court challenge—the same idea was litigated to death in 2009—hunters could start blowing away grizzly bears that wander off the park. The tolerable kill rate is apparently about 100 bears, with the discretion of death getting redlined again if the bear population dips below 600 grizzlies.

Recent experience demonstrates just how fast that would likely happen, given the government-approved bear hunt in Florida last year that turned the state into a slaughterhouse where nearly 300 black bears were run down and gunned down in less than 48-hours. While the suits in Tallahassee had set aside a full week in October for legal bear killing and capped the body count at 320 bears, so many excited shooters fanned out across the Sunshine State with a license to kill that the game wardens pulled the plug after just two days of butchery that included illegal kills of nursing sows and cubs.

One shooter proudly described to a reporter how he was able to ambush a bear, wound it, and then chase it down as it tried to hide and “finish it off.” To be clear, that ‘hunter’ had no real interest in the sustenance a bear would provide a human in the wild; the meat, the fur and the assorted bones that could be fashioned into utility tools. No, that dude and the rest of his ilk simply get off on killing something—and that bear hunt in Florida was a thrill kill in the starkest sense of the term set on a massive statewide scale.

So why not relocate a hundred or more of the Yellowstone grizzlies to other regions of this huge country of ours, simultaneously reducing the pressure on the Yellowstone ecosystem while reintroducing the big bear into places he once roamed at will? In fact, the U.S. Fish & Wildlife Service—the same agency now plotting the Yellowstone kill zone for the bears—was reportedly considering proposals to reintroduce the grizzly bear across a 110,000-square-mile range spanning five states that haven’t seen a grizzly outside of a zoo in almost a century; California, Arizona, Utah, Colorado and New Mexico.

Wildlife biologists have determined the Sierras in California to be a plum location for a new colony of grizzlies, but not surprisingly Sacramento seems content to keep the grizzly on its flag as a memento, but little else. California’s Department of Fish & Wildlife’s Eric Loft told the Los Angeles Times in 2014 “I can understand people wanting to see them here, but is it really suitable given that California has nearly 40 million people?”

Loft’s comment unintentionally exposed the core issue in play: with 40 million people in California and America on track to hit 400 million people by mid-century, if not sooner, even just a literal handful of grizzlies in one of the largest states in the nation is seen as an immediate and unsuitable risk—to the guy in charge of California’s wildlife management.

Just as the efforts to restore and reintroduce the North American Gray Wolf in various regions outside the havens and redoubts it was driven into has been met with howls of protest and barrages of bullets and horrifying traps set by the corpulent, bellicose ranchers who see the land as theirs alone, the grizzly is unlikely to ever make any meaningful comeback in the Lower 48 states where it once reigned.

For every grizzly bear gunned down outside of Yellowstone, the United States will gleefully add another 100,000 people to its population.

Whether or not the courts approve the government sanctioned grizzly-killing spree this time around, the bear populations will likely remain bottled up inside a few preserves as big game hunters eye Alaska and its 30,000 grizzlies as the best place to travel to behold something magnificently beautiful and then kill it for fun.