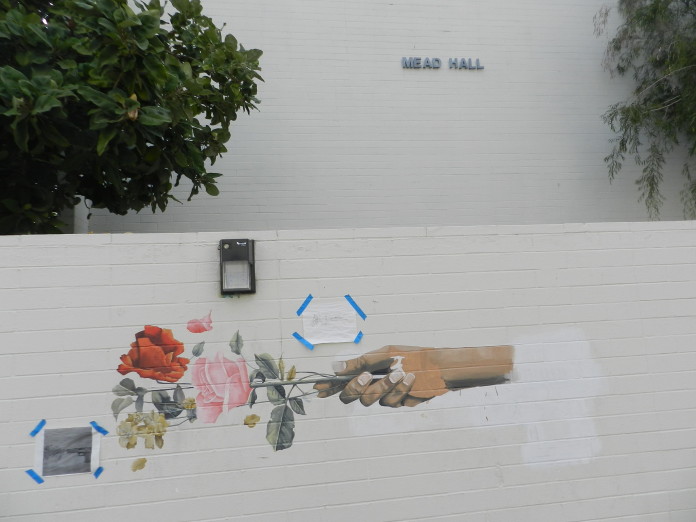 Even in the comfortable womb of progressive ideological orthodoxy that American universities have become, the small mural that sprouted recently on a wall at Pitzer College’s Mead Hall must have seemed to most students to be well within the boundaries of the sociopolitical sameness that is now required on campus.

The mural by freshman Pitzer student Selena Spier was a tip of the hat of sorts to the iconic images of student demonstrators and hippies placing flowers into the leveled barrels of M-14s held by troops that had cordoned off the Pentagon in 1967. In Spier’s updated take on the vibe from that heady Summer of Love, she used a handgun sprouting roses in ironic, wishful beauty.

But when Pitzer Student Senator Gregory Ochiagha viewed the mural, he apparently saw neither art nor ironic beauty subtly portrayed, but rather an emotionally challenging threat that blossomed with racist overtones. And he sounded the alarm.

“For me and a lot of my friends, many of them students of color, we just felt that with police brutality being such a national issue, it seemed extremely insensitive to have a large depiction of a gun, where we would literally have to see it every time we walked out of where we lived,” Ochiagha told the Claremont Colleges five campus newspaper The Student Life. “I just felt that something had to be said.”

Well, not really just ‘said.’ Clearly something had to be done.

So Ochiagha, who is black, sent out a campus-wide email to Pitzer students alerting them that the mural posed a threat to the emotional wellbeing of those most sacred of cows grazing on the lush pastures of academia today—‘students of color’—and the writing was soon on the proverbial wall, even as the mural wouldn’t be for long.

According to news reports published in campus media, Spier got the message and quickly spoke with Ochiagha, agreeing to alter her mural so it would be in compliance with the standards that Ochiagha and his fellow ‘marginalized’ students have established for artistic expression at the college, where annual tuition now approaches $64,000.

Spier painted over the offending handgun and replaced it with a black hand clutching the flowers instead, a revision that was apparently pre-approved of by Ochiagha. “I spoke with Gregory earlier and we agreed on a modification that preserves the integrity of the original piece while avoiding any potential triggering content,” Spier told the Claremont Independent, a student campus magazine.

But Spier went further than just scrubbing her offending mural, offering an almost hostage-like apology that made it clear she understood her offense and indeed her place amid the campus cultural hierarchy: “I have absolutely no right to decide whether or not my artwork is offensive to marginalized communities—nor does anyone else in a position of privilege, racial or otherwise.”

While no artist working in any medium or genre maintains control of how their work will be received and perceived by the public, nor the reaction that it evokes, Spier’s mea culpa carried the sad tone of an artist surrendering her right to create on her own terms the vision she wished to share and instead submit and obey the terms meted out by the walking Revolutionary Standards Compliance Committee of one Gregory Ochiagha.

The college’s administration cheered the mural’s makeover, with Associate Dean of Faculty Linus Yamane telling The Student Life “It’s great when students can work things out amongst themselves. I think we need more students who are listening to each other and being sensitive to each other.” Far from harboring grave concerns about the impact on free expression this episode of editing-on-demand will have on campus, Yamane essentially is calling for more of it.

But Spier’s reconfiguring her mural to a neutered version that complies with Ochiagha’s instructions unfortunately packs a far more powerful message about this era than the time her original artwork was meant as a celebration of—the students facing those guns at the Pentagon and placing flowers in them were far more courageous, and far more revolutionary, than those today that buckle, obey, submit and retreat in the face of nothing more threatening than someone saying “I find that offensive.”

And it is those students like Ochiagha today that roam campuses determined not just to force their viewpoint upon others but rather to enforce an acceptance and celebration of it that are far more dangerous to a free society than those soldiers who pulled the daisies out of their rifles nearly a half-century ago.

Pitzer College’s small campus is centered by the gentle swells of ‘the mounds,’ a grassy mall that every spring hosts the college’s eclectic Kohoutek Music & Arts Festival which has served as the college town of Claremont’s annual Woodstock for decades. And the campus itself is a celebration of art with murals, some dazzling and others subtle, adorning the walls of the residence halls. But as beautiful and inspiring as many of them are, one aspect that becomes quickly inescapable is the one-dimensional nature of their political subtext.

While The Student Life dutifully reported the threat of potentially “emotionally triggering” art that Ochiagha had discovered sprouting on one of Pitzer’s walls, the newspaper missed the opportunity to explore just what is considered a ‘triggering’ image at Pitzer and the rest of the Claremont Colleges and what is not. While a mural of flowers stemmed into a gun’s barrel threatened Ochiagha’s mental and emotional safety (his campus-wide email declared: “My Black Mental and Emotional Health Matters.”), the newspaper didn’t take the opportunity to report that for years Pitzer featured a large mural of convicted cop-killer Mumia Abu-Jamal, who murdered Philadelphia Police Officer Daniel Faulkner in 1981, and explore whether that might pose an intimidating statement.

Or perhaps the message is that Faulkner’s murder, as a white police officer brutally gunned down at the hands of a black criminal, is the kind of ‘trigger event’ officially celebrated and honored at Pitzer?

The mural of Abu-Jamal fell not all that long ago as a result of the ongoing frenzy of building at the colleges, but there’s plenty of iconic Left figures adorning the walls of Pitzer, including the required visage of Che Guevara.

But as Ochiagha pointed out in an online blog post, no mural at Pitzer has made him feel happier or more at home on campus than a large one depicting a blonde haired white male alongside a black male with red, white and blue bunting streamed across their faces, blinding the white man by covering his eyes while silencing the black man by covering his mouth.

No doubt a comforting message to students like Ochiagha as they stroll the campus on the constant lookout for artistic expressions that doesn’t serve their cause, doesn’t advance their agenda and doesn’t willingly bend to their oh so ‘marginalized’ will.