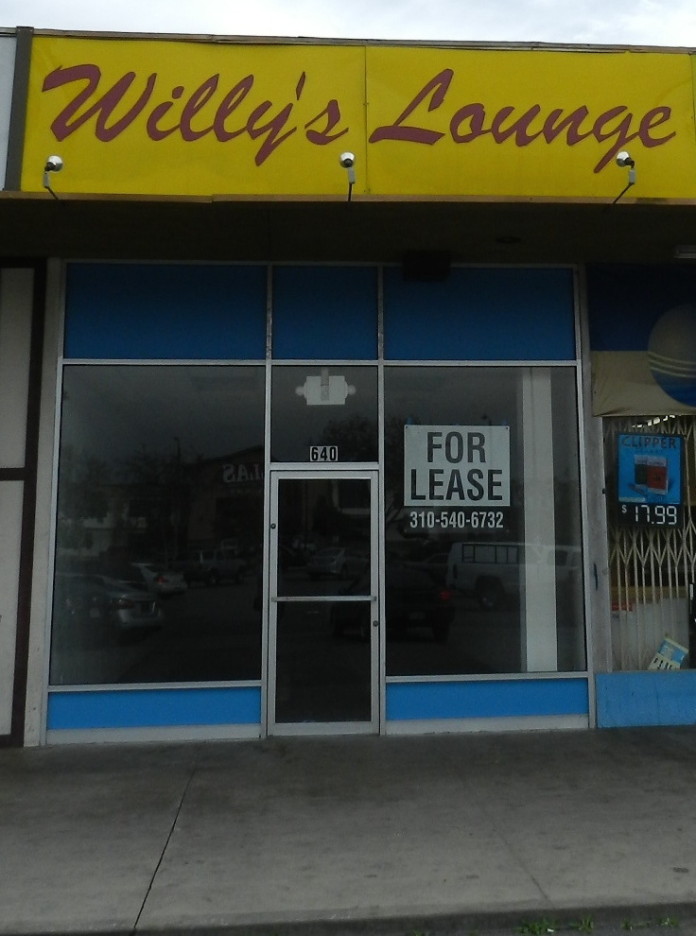 In this era of slick alehouses, of craft spirits and IPAs and whatever other marketing gimmick a bar can employ to sufficiently brand itself as a custom experience to satisfy the desires of trend drinkers, the authentic American dive continues its long march to oblivion.

On Pomona’s gritty Holt Avenue, that mean stretch of cratered asphalt that once was a thriving commercial artery in the capital city of the Pomona Valley but had long given way to hookers, hustlers and hobos that plied its decay, another watering hole for the working class has died with little fanfare or even notice.

Willy’s Lounge, where for most of its decades-long existence was demarcated by simply a sign with its name, at one time under which ran its own striking brand appeal: ‘Open at 6 a.m. daily!’ slipped silently away without so much as the shattering of glass or the wail of a police siren to say farewell.

Tucked alongside what was once an old H. Salt, Esq. Fish & Chips, the storefront sliver that was Willy’s Lounge was an archetype of a place and time where working folk went to drink, smoke cigarettes and consider the triumphs and tragedies in their lives as Patsy Cline offered a soundtrack. Willy’s served booze and smokes, not Kobe sliders and hookah. It’s bar stretched down the narrow confines of a joint suitably darkened to conceal the dinge, the kind of place where everyone (which might number between one or twenty people depending on the time of day) turned to look at who let the sunshine in every time someone walked through the door.

I don’t recall the first time I pulled up a stool at Willy’s, probably around the mid-1980s, but I seem to remember it always being there, amid a strip mall that once was anchored between a Hughes Family Market on its eastern edge that ran along San Antonio Avenue and Thrifty Drugs on the west side at Paloma Drive, on the old parcel of property where the Pomona High School my parents attended sixty years ago once stood before it burned down.

Long after Hughes shuttered its market and Thrifty’s folded and H. Salt, Esq.’s shingle was unhung, Willy’s Lounge remained and beckoned as a place where memories could be pleasantly washed away with a 100-proof varnish remover—or engrained forever.

Around the mid-1990s it was the place where my journalistic colleagues and I would open at 6 a.m. for a morning of Bloody Marys after all night salons at my 1926 craftsman just up the street in Lincoln Park. It seemed less risky than the long run up Towne Avenue to the Hi-Brow on Route 66, where Orcas from Pomona, Claremont and even La Verne police departments were more likely to be encountered. From my pad in Lincoln Park, we could walk to Willy’s if it came to it, and on a few occasions we did, to wait outside in a morning chill with an odd assortment of fellow human fauna in various stages of decay, just waiting for the door to be unbolted.

In the mid-1980s, when I was working deliveries to pay for my college, I would pass The Red Derby in downtown, somewhere off Los Angeles Street around the flower mart and skid row, and marvel at the old men and a couple of women that were always gathered out front waiting for Holy 6 a.m. to strike. They were of the fabled ‘Greatest Generation,’ as Tom Brokaw once declared them, these men who had come home from World War II and spent their days in the factories that still hummed on graveyard shifts until it was their turn to be set to pasture, where they appeared as stragglers in the strange land of the mid-1980s. And they loitered in front of The Red Derby, the men in slacks, fraying sports jackets and wearing black leather shoes long past a shine or sole, an unfiltered Lucky either hanging off their lip or burning ever closer to their fingers. The ladies covered in a mishmash of 1940s apparel that was splashed against some gaudy fur that crawled cool from the ‘60s but was now generational road kill draped over their shoulders.

And they were all there, waiting for church to begin, the daily communion.

Standing in front of Willy’s on a morning a couple of decades later, watching the traffic pickup on Holt, I wondered if there wasn’t some college kid on delivery looking over as he passed and thinking to himself ‘Check that out, man, waiting for the pour.’

It was a hard joint in the heart of a hard luck town, but I never saw a fight at Willy’s Lounge, and not very often raised voices unless it was a salty punch-line that provoked nothing more than hearty laughter. Like any real dive bar, Willy’s drew more than just the working class, the underworld and hard-drinking writers on momentary sabbatical. Old-timers from an era past twilight and college kids on safari would show up, along with the odd businessman on a liquid lunch break and the gangbanger looking for some quiet time over a glass of whatever.

Probably the most memorable moment at Willy’s for me came sometime in the fall of 2002, one Bloody Mary morning with Susan, my girlfriend at the time, a Ph.D. from Claremont Graduate University who was beautiful and brilliant and well acquainted with the drinking life. The Hi-Brow had been more her joint during her CGU days, and we both recalled the ‘Brow’s’ reign when it still was lined with red vinyl booths and was a cop and college hangout filled with tabletops of potential adventure. Though each of us had completed our residencies at The Black Watch Pub, we spent most of our libation time between the patio at Claremont’s Harvard Square or at the Rancho at the top of Lake Avenue in Alta Dena, or down at The Colorado when it was still a Pasadena dive. Or more often we’d shuttle between the piano bar comforts of Stoney Point and the Old World elegance of the Ritz Huntington, as Susan’s pad was in South Pasadena. But Willy’s Lounge provided the occasional good morning we were looking for back then.

During one in particular I had walked across the parking lot to what was then an ARCO station on the corner for a couple packs of Marlboro Lights, then made my way back into Willy’s where, as I was walking in the door, a patron walking out casually informed me “You’re girlfriend took a header in the ladies room.”

And she was still in there, on the floor. Not out really, more like she was resting her eyes. Collecting her thoughts.

I got her up on her feet and she rallied for one more at the bar, where she got a shrug and a hug and one on the house before we headed back to my pad for the rest of the day in bed. Her gravitational mishap in the ladies room wasn’t par for the course at Willy’s but it wasn’t a three-alarm fire either. It was just one of those things.

And that’s the kind of joint that is lost with the passing of Willy’s Lounge; a place but also a time and an atmosphere that is fading away, one lonely landmark at a time.

There are still a few hard nails sticking out of the decaying planks of Pomona, a few notable surviving bars in an era when real stand-alone bars are no longer permitted. There’s Characters on First Street, where gangster Frankie B. was summoned a decade ago to a meeting following his parole and was summarily whacked inside the bar. My paternal grandmother was a bar maid at the same joint in the 1940s and ‘50s when it was called The Club. And there are the stoic holdouts like The Back Door on Mission and The Hook Up on Second Street, which used to be a lesbian bar called Mary’s that my crew and I would lease as a shoot location when I was still producing for Flynt nearly twenty years ago. We shot scenes all over downtown Pomona during those years, from Galleria Rustica in the old Progress Bulletin building to the famed Chicano artist Gilbert ‘Magú’ Luján’s studio on the other end of Second Street, but we always loved shooting at Mary’s because in the dark confines of that windowless dive, as the ice rattled and the drinks were poured, we got to mix business with pleasure.

And there’s still the Hi-Brow on Pomona’s north end, perhaps she will be the last to go, with her Flaming Dr. Peppers ablaze. The ‘wacky castle’ across the street  from the Brow that was formerly a well-established speed pit known as Friar Tucks got a makeover by the perpetually angry Jon Taffer, but his staged interventions on Bar Rescue is really a death sentence for the very character of the real bars that have served America so well for so long.

But many have fallen in the harsh tides that have swept across Pomona since the 1970s, wiping away The Jet Set, Papa Bills, The Mad House, Kennedy’s Pub and Grandma’s Attic. In Los Angeles, The Red Derby is long gone and the legendary Joker on Pico was shutdown due to alleged narcotics activity. Sam’s Place in Brea, a century old saloon and former brothel that had once served the oilmen that had labored in the hillsides between Diamond Bar and North Orange Count was a landmark long bar that the city’s suits promised to preserve before they saw fit to bulldoze it in a corrupt redevelopment scheme that lined the old downtown with Outback Steak Houses and Old Navy outlets. The Gold Room and Short Stop still hold the line in Echo Park, but the corrosion of hipsters—the foodie equivalent of the drinking world—appears to be a looming threat. The Townhouse in Venice, no longer quite the dive it once was, still carries its century-old bona fides.

And to the east in Lake Elsinore, a ramshackle of a former resort town that might be best described now as Pomona with a lake, there is the grande dame of Southern California dives: The Wreck, where I first saddled up in 1990 while on assignment covering the serial killer William Suff, who had not yet been caught. Suff’s now on death row, and a quarter century later I can only hope The Wreck survives him.

Still, with the front facade of Willy’s Lounge now torn away to reveal its gutted and painted interior, a ‘For Lease’ sign hanging in its window, one has the conflicted sense that perhaps its better it quietly served a few last rounds, raised a glass with their patrons and said goodnight before Taffer showed up with his cameras to start screaming about jigger pours, loss-stop trigger tops and color scheme themes for the bartenders.

Some fates are crueler than death.

So farewell Willy’s Lounge, and thanks old friend for those eye-opening Bloody Murders, er, Mary’s. Your ambience will be fondly remembered and your pours sorely missed.